As a starting point, measuring the costs of environmental protection isn't easy, because the ways in which firms and consumers adapt and react to environmental laws isn't easy to measure.  The costs and indeed the relevance of environmental protection is also relatively small for many firms, compared to many other costs and issues they face: wages and a workforce with the needed skills; the costs and reliability of suppliers; the reliability of transportation, communication, and energy infrastructure; the abilities of competitors and challenges of international markets; along with taxes, workforce and land-use regulations. When asking how even fairly substantial changes in environmental rules affect productivity, it might be hard to sort out environmental rules from the rest of these factors.

Finally, there is a theory called the "Porter hypothesis," named after Michael Porter at Harvard University, which cites evidence that when environmental goals are set in a strict way, but firms  are allowed flexibility in how to achieve those goals in the context of a competitive market enviroment, firms often become quite innovative--and in some cases, the innovations induced by the new environmental rules save enough money that the rules end up imposing no economic costs at all. For an early statement of the Porter hypothesis and a counterpoint, the interested reader might look up the 1995 exchange on the subject in the Fall 1995 Journal of Economic Perspectives. Michael E. Porter and Claas van der Linde make their case in "Toward a New Conception of the Environment-Competitiveness Relationship," (9:4, 97-118), and Karen Palmer, Wallace E. Oates, and Paul R. Portney respond in "Tightening Environmental Standards: The Benefit-Cost or the No-Cost Paradigm?" (9:4, 119-132).

For a flavor of the argument, Porter and van der Linde argue that firms are often not especially knowledgeable about their internal environmental costs and benefits, and when regulation refocuses their attention, substantial gains are possible. They write (citations omitted):

In 1990, for instance, Raytheon found itself required (by the Montreal Protocol and the U.S. Clean Air Act) to eliminate ozone-depleting chlorofluorocarbons (CFCs) used for cleaning printed electronic circuit boards after the soldering process. Scientists at Raytheon initially thought that complete elimination of CFCs would be impossible. However, they eventually adopted a new semiaqueous, terpene-based cleaning agent that could be reused. The new method proved to result in an increase in average product quality, which had occasionally been compromised by the old CFC-based cleaning agent, as well as lower operating costs. It would not have been adopted in the absence of environmental regulation mandating the phase-out of CFCs. Another example is the move by the Robbins Company (a jewelry company based in Attleboro, Massachusetts) to a closed-loop, zero-discharge system for handling the water used in plating. Robbins was facing closure due to violation of its existing discharge permits. The water produced by purification through filtering and ion exchange in the new closed-loop system was 40 times cleaner than city water and led to higher-quality plating and fewer rejects. The result was enhanced competitiveness.

In contrast, Palmer, Oates, and Portney acknowledge that such cases are possible, but suggest that they are rare exceptions. They cite evidence from firm surveys done by the Bureau of Economic Analysis that suggest that offsetting gains from environment regulations are only about 2% of the costs. They write:


The major empirical evidence that they advance in support of their position is a series of case studies. With literally hundreds of thousands of firms subject to environmental regulation in the United States alone, it would be hard not to find instances where regulation has seemingly worked to a polluting firm's advantage. But collecting cases where this has happened in no way establishes a general presumption in favor of this outcome. It would be an easy matter for us to assemble a matching list where firms have found their costs increased and profits reduced as a result of (even enlightened) environmental regulations, not to mention cases where regulation has pushed firms over
the brink into bankruptcy. ... [W]e spoke with the vice presidents or corporate directors for environmental protection at Dow, 3M, Ciba-Geigy and Monsanto—all firms mentioned by Porter and van der Linde in their discussion of innovation or process offsets. While each manager acknowledged that in certain instances a particular regulatory requirement may have cost less than had been expected, or perhaps even paid for itself, each also said quite emphatically that, on the whole, environmental regulation amounted to a significant net cost to his company. We have little doubt about the general applicability of this conclusion.

More recently, Stefan Ambec, Mark A. Cohen, Stewart Elgie, and Paul Lanoie looked at the evidence on "The Porter Hypothesis at 20 Can Environmental Regulation Enhance Innovation and Competitiveness?" in a 2011 working paper for Resources for the Future. Tomasz Koźluk and Vera Zipperer have now published "Environmental policies and productivity growth: a critical review of empirical findings," in the OECD Journal: Economic Studies (vol. 2014: 1, pp. 1-32).

These papers reiterate the more-or-less standard conclusion that it's hard to disentangle costs of environmental protection and overall economic growth, for all the reasons given above.  They emphasize that the Porter hypothesis only holds for well-designed environmental policies: for example, policies that require firms to take specific anti-pollution actions do not offer flexibility to meet clear goals. Koźluk and Zipperer also offer some useful discussion of potential channels in which environmental protection might improve overall economic productivity. For example, when some industries have costs of cleaning up water, it may reduce costs for other industries that make use of clean water. If the revenues from a carbon tax or other pollution tax are used to reduce the marginal rates of other taxes, the economy could benefit. If environmental regulations are more likely to drive inefficient companies out of business, then more-efficient companies could benefit--leading to an overall gain in efficiency for the economy. Stricter environmental rules could encourage companies to produce better equipment for monitoring and addressing pollution, which could then give those companies an advantage in the global economy for selling such equipment.

But this is still a lot of "ifs." In a December 2014 OECD working paper, Koźluk and Zipperer, together with Silvia Albrizio and Enrico Botta, offer then own attempt at addressing these questions in "Do Environmental Policies Matter for Productivity Growth? Insights from New Cross-Country Measures of Environmental Policies" (Economic Department Working Papers No. 1176).

They create a measure of "environmental policy stringency" that is based on policy measures affecting air pollution and climate issues. Their measure combines market-based and non-market-based policies. Market-based policies include taxes on carbon dioxide, nitrogen oxides, sulfur oxides, and diesel fuel, as well as trading schemes that involve incentives to use renewable energy or to save energy. Non-market policies include setting emissions standards for these emissions, along with particulate emissions, as well as government research and development spending on less-polluting energy. They have data back to the 1990s for a range of high-income countries. Here's one way of looking at their current results. The horizontal axis shows the stringency of their environmental policy measure for non-market instruments, while the vertical axis shows the stringency for market-based instruments (both measured on a scale from 0-6). Poland, for example, stands out as country with above-median market based standards, but below-median nonmarket standards. 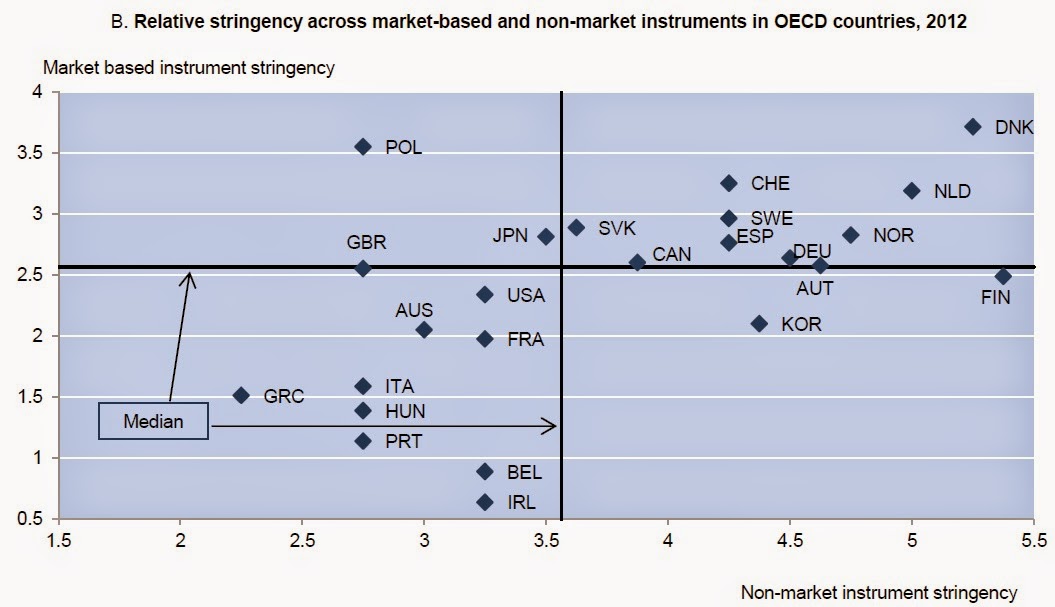 The authors then compare this data on environmental rules to productivity data at the national, industry, and firm level. They summarize the results this way:


There is no empirical evidence of permanent effects of environmental policy tightening on multifactor productivity growth (MFP), positive or negative. Analysis based on a new cross-country dataset with unprecedented time-series coverage finds that all effects tend to fade away within less than five years. No lasting harm to productivity levels is found at the macroeconomic, industry or firm levels. ... Most advanced industries and firms see the largest gains in productivity levels, while less productive firms are likely to see negative effects. Highly productive firms, often the largest firms in the industry, may be best suited to profit rapidly from changing conditions – seizing new market opportunities, rapidly deploying new technologies or reaping previously overseen efficiency gains. They may also find it easier to outsource or relocate production abroad. Less advanced firms may need higher investments to comply with the new regulation, exhibiting a significant temporary fall in productivity growth. Assuring a swift reallocation of capital and minimising barriers to entry are necessary conditions for the efficiency gains from environmental policy tightening to be translated into economic growth. A non-negligible part of the productivity gains is likely to come from the exit of the least-productive firms.

Of course, this study isn't the final word. It is focused on high-income countries, which start off with (roughly) similar kinds of environmental protection compared with many other countries in the world, and also start off with (roughly, over several decades) levels of productivity growth. But that said, the study suggests that an important reason why stricter environmental policy doesn't impose lasting costs on productivity is because it helps drive less efficient firms out of business and thus allows more efficient firms to expand.