Productivity of High-Income Countries in the Long-Run

Over time, the rise in productivity as measured by output per hour is what makes the standard of living rise. For some people, I've found that the power that statement is stronger if it's put in reverse: unless productivity as measured by output per hour rises, the average standard of living can't rise. Morever, if output per hour isn't rising and the size of the economic pie (per person) isn't rising, then we move closer to zero-sum society in which all social and policy tradeoffs--helping the environment, or the poor, or the schools--become tougher to address.

Thus, my eye was caught by a figure showing long-run rates of labor productivity over time that apperared in a short article called "Productivity’s wave goodbye?" in the recent issue of OECD Observer, (2014 Q3). The red line is the U.S. economy; the blue line is the euro area; the green line is Japan; and the gray line is the United Kingdom. No matter how you slice it, productivity growth is low all around.

The figure appears in a paper called "Productivity trends from 1890 to 2012 in advanced countries," by  Antonin Bergeaud, Gilbert Cette et Rémy Lecat, published as a February 2014 by the Bank of France. The authors summarize the long-run patterns in this way (citations omitted):

1. From 1890 to WWI, productivity was growing moderately and was characterized by a UK leadership and a catch-up by the other countries.
2. After the WWI slump, the Interwar and WWII years were characterized by a heightening of the US leadership, as it experienced an impressive big wave of productivity acceleration in the 1930s and 1940s, while other countries struggled with the Great Depression legacy and WWII.
3. After WWII, European countries and Japan benefited from the big wave experienced earlier in the United States.
4. Since 1995, the post-war convergence process has come to an end as US productivity growth overtook Japan and other countries’, although it is not up to its 1930s or 1940s pace. Shorter and smaller than the first one, a second big wave appeared in the US and, in a less explicit way, in the other areas.

Hence, all countries experienced that one big wave of productivity acceleration, but in a staggered manner: first the United States in the 1930s and 1940s, next the European countries and Japan after WWII. This wave was the strongest in the Euro Area and Japan, but starting from a much lower starting level than the United States. ... After several leaps forward of the US relative productivity level during each World War and its own big wave, this gave rise to a convergence process after WWII which appeared completed in the 1990s for the Euro Area - but not yet for Japan or the United Kingdom- when this process came to an end.


The data in the graph above is smoothed out (that's what "Hodrick-Prescott filtering" means in the title of the figure.) Here's a figure showing post-World War II quarterly data on U.S. output per hour worked (one standard measure of productivity), generated by the ever-useful FRED website run by the Federal Reserve Bank of St. Louis. 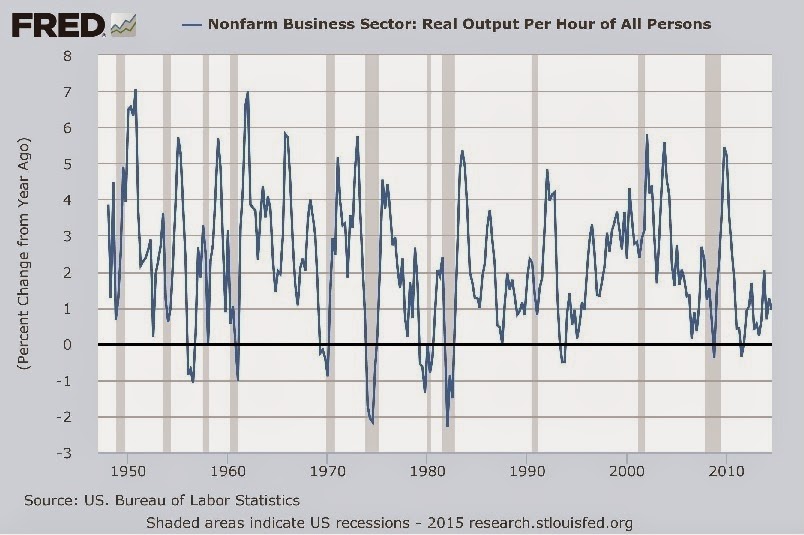 Alan Blinder, the prominent macroeconomist, summed up the recent U.S. experience in an op-ed he wrote for the Wall Street Journal last November:

In sum, here’s what we know—and do not know—about productivity growth. First, it’s been dismal for the past four years. Second, economists cannot predict swings in productivity growth. Each sharp swing shown in the chart took us by surprise. Third, while the Fed is now forecasting something near 2% productivity growth over the next several years, it really has little basis for choosing that number. That’s not a criticism; no one else has a better basis for a different number. We are all in the dark.

So maybe some of the copious attention now being devoted to assessing labor-market slack should be redeployed to studying productivity growth. It might be more productive.

Posted by Timothy Taylor at 7:30 AM