The Surprising Stability of the US Federal Budget

Federal budget issues are often debated at high volume. It seems like either the all-powerful liberals have been raising taxes and spending to unprecedented and unbearably high levels, or the all powerful conservatives have been slashing spending and taxes to unprecedented and unbearably low levels. Thus, I always smile a bit in looking at actual budget numbers over the last half-century or so, which reveal a remarkably level of consistency over time. For some recent specifics, turn to
The Budget and Economic Outlook: 2015 to 2025, just published by the Congressional Budget Office.

For simplicity and clarity, focus on federal spending and taxes expressed as a share of GDP in each year. Then, here's a figure showing the pattern over time. The blue line shows outlays, which average 20.1% of GDP over the period from 1965-2014. The green line shows average federal revenues, which average 17.4% of GDP over that same half-century. In 2014, federal spending was 20.3% of GDP and federal revenue was 17.5% of GDP, almost bang-on their historical averages. 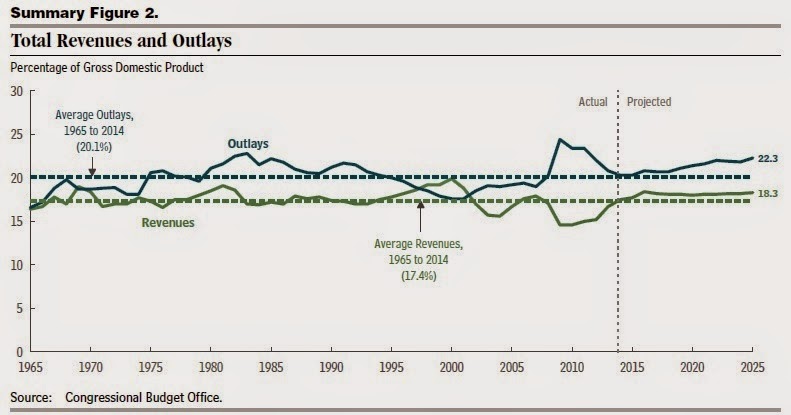 Now, it's true that expressing the totals as a share of GDP can be a little misleading. After all, the GDP for 2015 will be about $18 trillion, so while a movement of 1 percentage point on the vertical axis might look small, it represents $180 billion in spending or taxes--certainly enough to be worth a lively political dispute.

On the other hand, the figure put many of the major budget movements of the last few decades into a long-run perspective. For example, you can see the early 1980s combination of tax cuts and higher defense spending under President Reagan, You can see in the 1990s how a combination of a buoyant "new economy," along with tax increases on those with high incomes, lower defense spending, and less need for government services led to a few years of budget surpluses. You can see the Bush tax cuts in the early 2000s. You can see the extraordinary drop in tax revenues during the Great Recession from 2007-2009, and the extraordinary increase in federal spending in an attempt to stimulate the U.S. economy. And even after all those changes, as the U.S. economy has staggered back toward recovery in the last few years, federal spending and taxes by 2014 returned to their historical averages.

Of course, this descrption of long-run averages offers no reason to assume that the long-run levels of spending and taxes are optimal, or that the composition of spending on one side or taxes on the other side should not be adjusted. But it does suggest that the political forces pushing on federal taxes and spending have tended to balance each other out over the last five decades.
Posted by Timothy Taylor at 7:00 AM