Where Has Welfare Reform Taken Us?

Back in the 1980s and early 1990s, there was much talk of "welfare reform," which referred specifically to a program called Aid to Families with Dependent Children (AFDC). The concern was that the cash assistance given to low-income families through this program was helping to create a culture of dependency. For a sense of the tone of this discussion, consider these comments from Democratic President Bill Clinton to a National Governors' Association Conference on July 16, 1996:


I have been committed to ending welfare as we know it. ... Today, after long years of effort, I believe we are poised for a real breakthrough in welfare reform. Real welfare reform requires work, imposes time limits, cracks down on deadbeat parents by enforcing child support, provides child care. ...  We've cut through red tape and worked with you to set up 67 welfare reform experiments in 40 states, with more to come. We've granted more than twice as many waivers as the previous two administrations combined, and now, 75 percent of all welfare recipients are already under new rules. The New York Times called this a quiet revolution in welfare. Well, I'm proud that there are 1.3 million fewer people on welfare now than the day I took office, and that child support collections are up 40 percent.

But there's more to do. As you know, the state of Wisconsin has submitted a bold plan to reform welfare. We're working closely with Governor Thompson's staff, and I am committed, as I've said before, to getting this done. I'd just like to emphasize the things about this Wisconsin plan which are compelling to me: The idea that people should be required immediately to be ready to go to work, but that in return, they would have health care and child care guaranteed; and that the welfare money could be used to pay income supplements or wage supplements to private employers to put these people to work; and that if there is no private employment, these folks will be given community service jobs. That's what we ought to be doing everywhere. If we can create these jobs, we ought to require people to take them.

Clinton signed the Personal Responsibility and Work Opportunity Reconciliation Act into law soon after, on August 22, 1996. The main thrust of the bill was to put limits on how long one could receive welfare, along with adding programs intended to push recipients toward work and self-sufficiency. These programs vary across states, but can include support for training, job search, child care subsidies, programs to reduce out-of-wedlock pregnancies, and more. The program was renamed as Temporary Assistance for Needy Families (TANF). For a sense of what has happened since then, and what may happen next, a useful starting point is the January 2015 report from the Congressional Budget Office: "Temporary Assistance for Needy Families: Spending and Policy Options."

Here's a figure showing total national spending on TANF, and on AFDC before it, since 1994. The program includes both federal and matching state-level spending. The total amount spent has not change much, after adjusting for inflation. However, the composition of that spending has shifted substantially. Back in 1994 almost all of the spending was cash assistance, while the spending now comes primarily in the form of work support and other services. 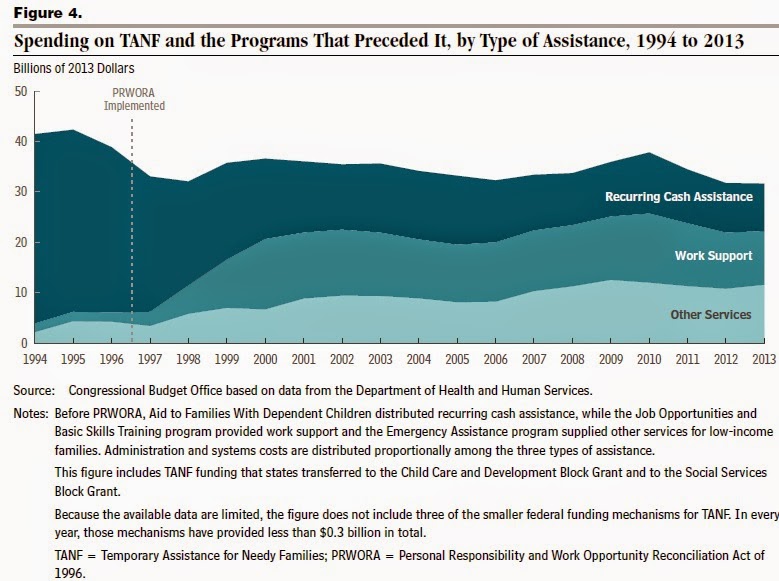 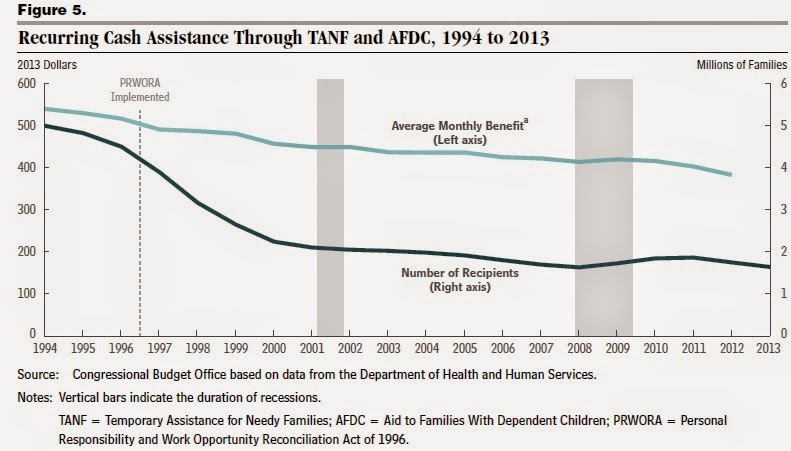 AFDC was controversial back in the day in part because it was a cash payment: that is, it wasn't provision of health care to the poor through Medicaid, nor was it provision of food stamps. The value of AFDC was not especially large compared to other means-tested programs for assisting the poor, and with the passage of time since welfare reform, it has become relatively even smaller.

Here's a figure showing federal spending on means-tested programs and tax credits. (Thus, the state-level spending contributions to TANF spending are not included here, but they are less than half the total and would not substantially alter the shape of the figure.) 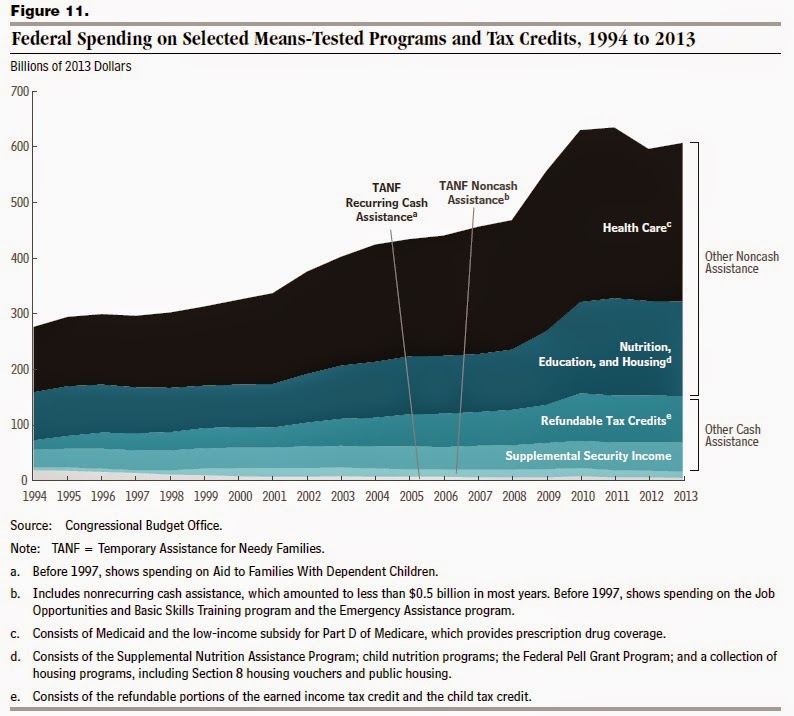 Cash spending through TANF is the very thin grey area at the bottom of the figure. TANF noncash assistance is shown by the very thin area above that. the next two areas show Supplemental Security Income, which goes to the low-income elderly as well as to low-income people of all ages with disabilities; and the effect of refundable tax credits like the earned income tax credit and the child credit. (The credits are called "refundable" because they not only can reduce the tax liability of those eligible to zero, but they can also generate a payment to the household.) Above this are the main noncash assistance programs, including food stamps and Medicaid.

In short, AFDC was a small share of means-tested assistance to the poor back in 1994--but it was a primary form of cash assistance to a number of recipients. Since welfare reform, the US has continued along this path: a focus on providing health care and food through targetted noncash programs to those with low incomes, while trying to tie cash assistance for the able-bodied to work effort, either through the earned income tax credit or through the work supports in TANF.