Global Economic Growth: All Productivity, All the Time

The growth of an economy can be divided into two parts: growth of population, and growth of output per person, which is commonly known as "productivity."  The McKinsey Global Institute looks at these patterns over the last 50 years in its January 2015 report "Global growth: Can productivity save the day in an aging world?" The report calculates that over the last 50 years, the global economy has grown at about 3.6% per year, with roughly  half of that coming from more workers and half coming from higher productivity per worker. But in the next 50 years, the rate of workforce growth is going to decline substantially, as population grows more slowly and ages more rapidly. We are headed toward a global economy where growth is determined almost entirely by the rise in productivity. 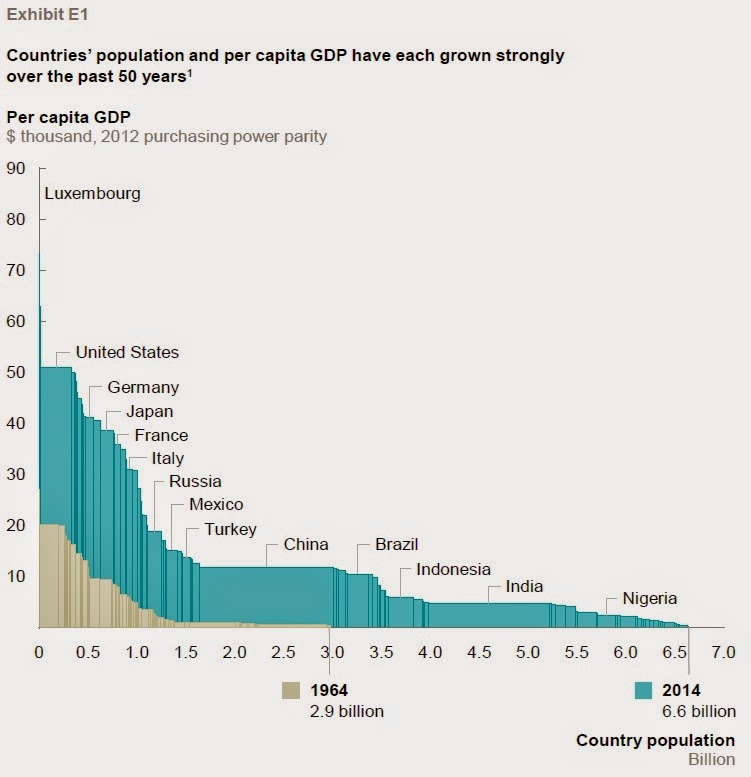 But looking ahead, many countries and indeed the world as a whole are headed for "peak employment." The nubmer of employees has already peaked in Germany, Japan, Italy, and Russia. Global employment is projected to peak around 2050. Encouraging greater labor force participation can influence these dates by a bit--for example, making it easier for older people to retire later--but the overall demographic trends are inexorable. 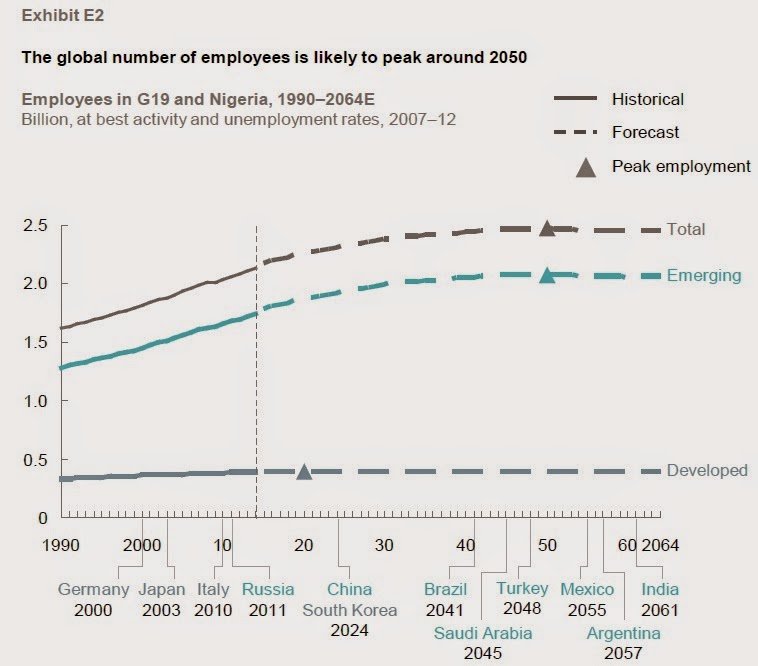 Thus, the growth of the global economy in the future is becoming less affected by population growth, and more heavily reliant on productivity growth. This raises some hard questions where the answers will only become apparent with the passage of time.

1) Can global productivity growth in the future be sustained and increased?

From a global perspective, there are two main contributors to economic growth: catch-up growth taht builds on already existing knowledge, and cutting-edge growth based on new discoveries and products. The McKinsey report suggests an number of opportunities for catch-up growth.

For high-income countries: "In developed economies, more than half—55 percent—of the productivity gains that MGI’s analysis finds are feasible could come from closing the gap between low-productivity companies and plants and those that have high productivity. There are opportunities to continue to incorporate leaner supply-chain operations throughout retail, and to improve the allocation of the time spent by nurses and doctors in hospitals and health-care centers, for example. Across countries, large differences in average productivity within the same industry indicate industry-wide opportunities for improvement. For instance, low productivity in retail and other service sectors in Japan and South Korea reflects a large share of traditional small-scale retailers. High costs in the US health-care system partly reflect the excessive use of clinically ineffective procedures. Even agriculture, automotive manufacturing, and other sectors that have historically made strong contributions to productivity growth have ample room to continue to diffuse innovations and become more efficient."

One of the great strengths of the McKinsey Global Institute is its studies looking at productivity levels with specific sectors and industries, where they see all sorts of opportunities for cutting-edge growth:


Online retail productivity, even in developed economies, can be more than 80 percent higher than modern brick-and-mortar retailers. ...

Typically, only one-third of a nurse’s time is spent directly caring for patients: non-core activities account for roughly 66 percent of nurses’ scheduled time ... Shifting health care to more cost-effective settings can reap large savings. ...  The biggest savings can be achieved from shifting inpatient care to outpatient care, shifting from outpatient care in hospitals to primary-care and other settings outside hospitals, empowering patients to treat themselves to a greater degree, and integrating care settings in which different providers that a patient might see are in the same organization. ClickMedix uses mobile phones and digital cameras to capture images, transmit patient information, and deliver remote consultations, resulting in a 25 percent reduction in administrative costs and a four- to tenfold increase in the number of patients seen by doctors and specialists. ...

Some opportunities require simply continuing existing industry research programs, such
as agricultural research into tailoring and improving seeds and agronomical practices to
raise crop yields in new geographies, and automotive industry initiatives to power cars using more efficient fuel technology. Others rely on technological innovations that could potentially transform many different industries. For example, highly efficient and intelligent robots— or bots—are already boosting efficiency in retail warehouses where they are deployed, mobile technology is increasingly being used to deliver health care in remote regions, and automobile manufacturers are installing a broader range of digital features in cars. Advanced materials such as nanolaminates—edible lipids or polysaccharide compounds—can be sprayed on food to provide protection from air or moisture and reduce food spoilage, while carbon-fiber composites can make cars and airplanes both more resilient and lighter. The Internet of Things can cut time spent in production processes by detecting potential failures early, increase crop yields by measuring the moisture of fields, and cut the cost of monitoring health dramatically. Such innovations are not confined to developed economies but are happening in emerging economies, too. For instance, Aravind Eye Care of India, which has become the largest eye-care facility in the world, performs cataract surgeries at one-sixth of the cost and with fewer infections than the National Health Service in the United Kingdom achieves.

More broadly, future productivity growth depends on a confluence of many well-known factors: a workforce with high and growing levels of education and skills; investment in research and development; paying attention to the multiple infrastructures involved with transportation, communication, and shipping; and a regulatory and legal environment that is supportive of innovation and competition.

2) Will the benefits of future productivity growth lead to good jobs at good wages?

There is a long-standing concern that technology growth can eliminate jobs. As the McKinsey report notes, the term “technological unemployment” was coined by John Maynard Keynes in an essay in 1930. I've pointed out on this blog that concerns over technology and automation eliminating jobs were strong enough in the early 1960s to lead to a presidential commission and report. In the last few decades, the concern has been less about the risk of mass unemployment: after all, the U.S. unemployment rate was 6.1% or lower from May 1994 to September 2008, except for a couple of months in 2003 when it rose as high as 6.3%. As of September 2014, it's below 6% again. This pattern does not look like a trend to mass unemployment. As the McKinsey report notes: "Countries that have flexible labor markets have tended to experience rapid changes in the kind of jobs that the economy creates. Take the United States as an example. About one-third of the new jobs created in the United States over the past 25 years were types that did not exist, or barely existed, 25 years ago."

It seems to me the real issue is not the prospect of mass unemployment, but instead the issue of what kinds of jobs people have. Can people who want them find career-type jobs--that is, jobs where you build skills, receive pay raises over time, have a degree of autonomy in your work, take on additional responsibilities over time, and can identify alternative jobs options if you want or need them?  Or are people in job that help pay the bills, but lack these future prospects? If such a change is occurring, is it baked into the pie of technological change and thus something that is difficult to affect with public policy, or might it be that with a different set of policy choices, future technological change has a different effect on labor markets?

Over the very long run, technological change and productivity growth have been extremely disruptive to economies, but have led over time and after many adjustments to a higher average standard of living.  I see articles and receive emails arguing that "this time is different," and the technological changes of the future will be far more disruptive than those of the past. Of course, it's impossible to disprove that the future will be different!

3) Is there an interaction between slower population growth and future productivity growth?

Does the peak workforce affect the prospects for future productivity growth? Or are these separate issues? One can argue that slower growth in the population and the workforce shouldn't really matter, as long as average or per capita growth continues. But when the idea of an economy experiencing "secular stagnation" was first argued by Alvin Hansen back in 1938, one concern was that slower population growth would mean slower economic growth, and the connection has been made in more recent arguments over secular stagnation, too.

The potential connections between population growth and productivity growth are not well-established. But there is some plausibility in the argument that a growing population represents larger future markets, and young consumer who may be especially open to new products, in a way that improves the incentives of firms and entrepreneurs to invest in new ideas and technology. Similarly, there is some plausibility in the argument that a growing workforce has a higher proportion of new workers, who may be more flexible about new practices and innovations, while a peak workforce has a larger share of older workers, who have not traditionally been the main source of innovations. I do not know whether these kinds of factors are large enough to make a substantial difference in productivity growth. But as we head toward a global economy where growth is all about productivity, all the time, more knowledge about these interactions will begin to emerge.