The European Central Bank launched a new wave of quantitative easing last week: that is, a policy in which central bank buys debt directly, in an attempt to stimulate additional spending and demand in the economy. As the head of the ECB Mario Draghi announced on Thursday: "Under this expanded programme, the combined monthly purchases of public and private sector securities will amount to €60 billion. They are intended to be carried out until end-September 2016 and will in any case be conducted until we see a sustained adjustment in the path of inflation which is consistent with our aim of achieving inflation rates below, but close to, 2% over the medium term." 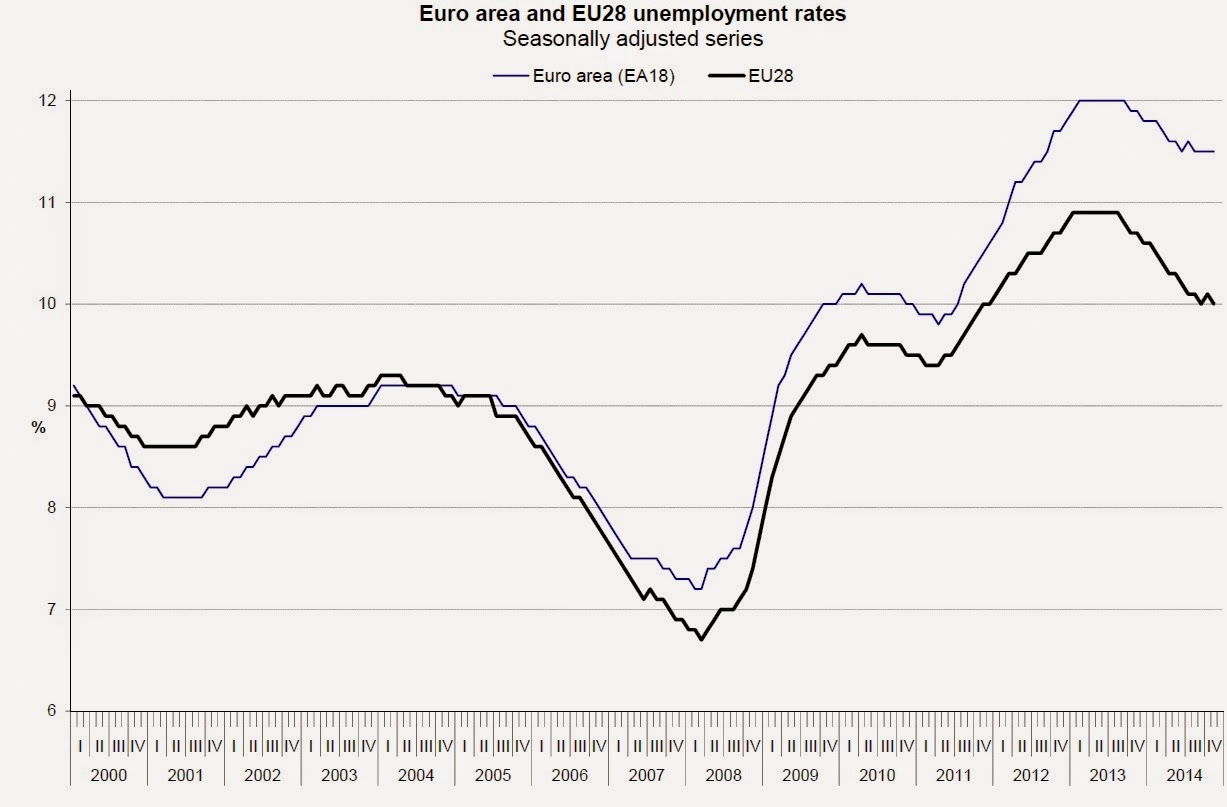 In the U.S., many of us worry that the drop of the US unemployment rate from 10% in October 2009 to 5.8% in December 2014 has happened so slowly, and that the decline may overstate the real improvement in US labor markets because of those who are no longer looking for work and are thus "out of the labor force." American readers, try to imagine the political, economic, and social conversation we would be having in the United States if the unemployment rate at the end of 2014 was higher than late in 2009!

The high unemployment rates, not unexpectedly, have been accompanied by slow economic growth. Here are the  Eurostat estimates of GDP growth published in early December. The data is for growth from the previous quarter, seasonally adjusted. The thin line shows the US economy. The dark line shows the euro area countries, and the dashed line shows all 29 countries of the EU. Quarterly changes bounce up and down a bit for idiosyncratic reasons, but still, the pattern is fairly clear. Both the U.S. and the EU had steep recessions around 2008-2009. Both seeemed to have entered a slow period of recovery from late 2009 up through 2010. But since about 2011, the U.S. economy has continued its slow but real recovery, while the EU actually went back into recession for much of 2011 and 2012, and barely edged back into positive growth in 2013. 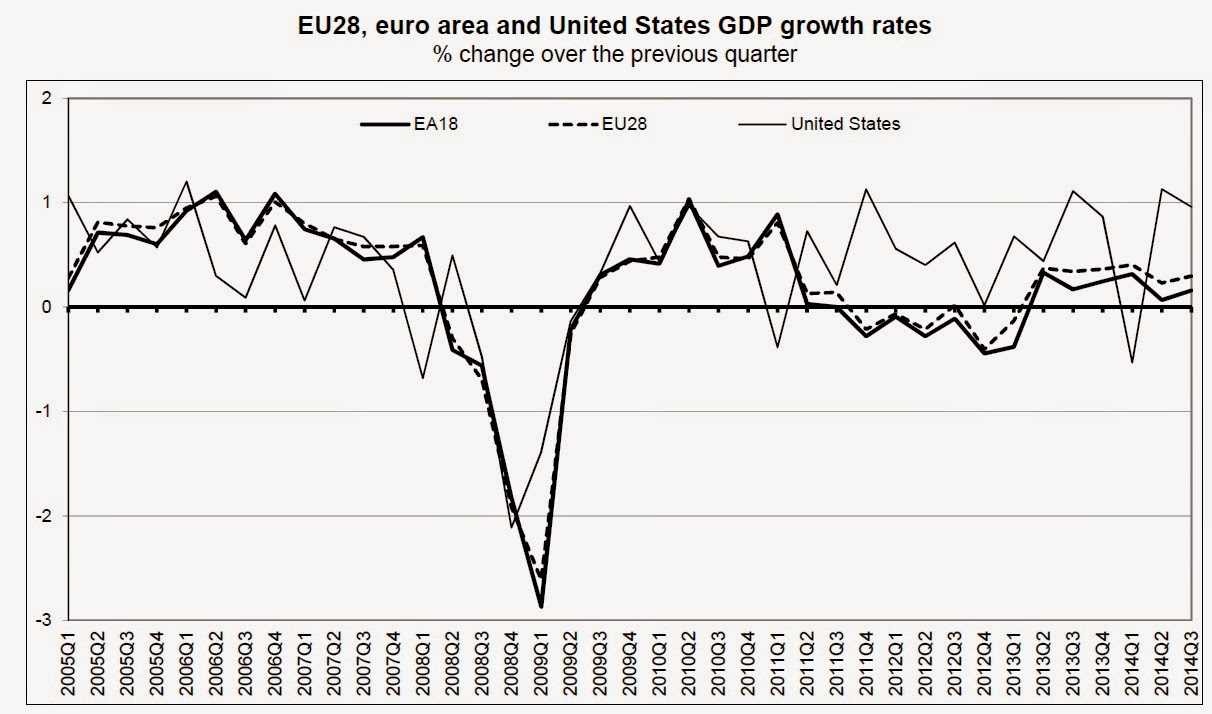 Here's the country-by-country data for quarterly rates of GDP growth in the third quarter of 2014. 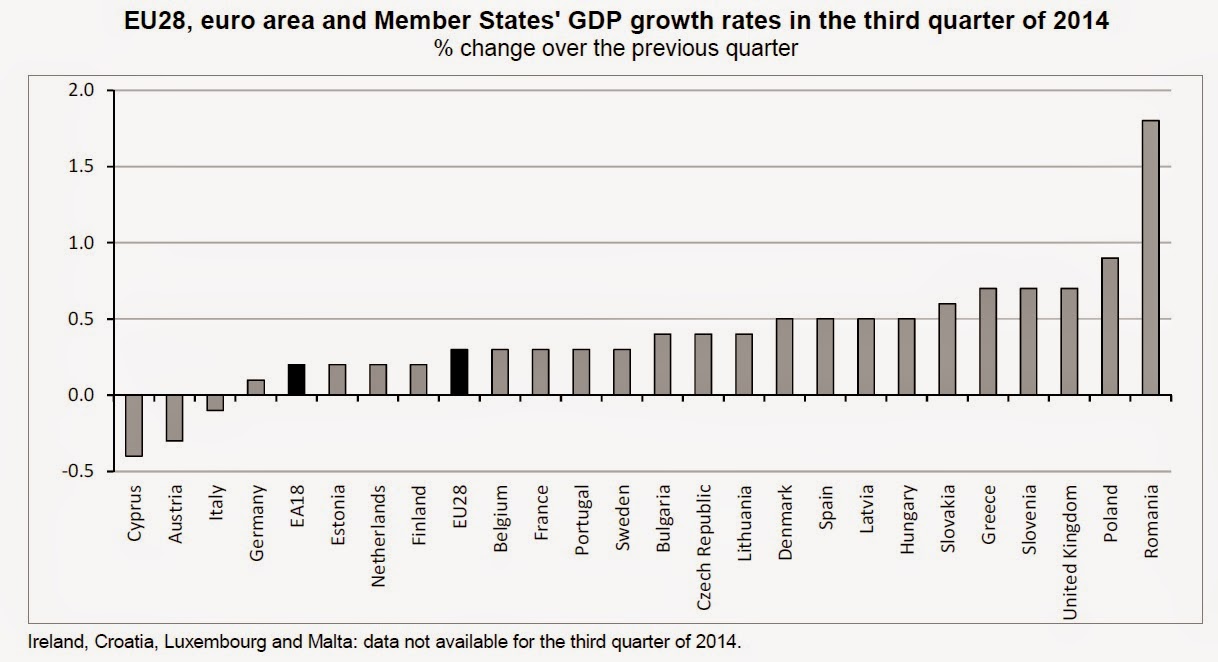 The U.S. Federal Reserve legally has what is called a "dual mandate": that is, it is legally required to worry both about inflation and also about growth and unemployment. When the European Central Bank was created, it was given a single target: keeping the inflation rate at 2%. At that time, the main focus was on holding the inflation rate to no higher than 2%. But in recent years, it has often been pointed out that the euro inflation rate is substantially less than 2%, and thus the ECB is not fulfilling its legal mandate. In the Draghi quotation noted above, for example, he says that the program of quantitative easing is justified until the euro inflation rate is back to 2% in the medium term.

Here are inflation statistics released by Eurostat in mid-January, with euro-area inflation shown by the solid yellow line and inflation for the EU as a whole shown by the blue dashed line. As many commenters have noted, the inflation rate in the EU peaked back around summer 2011, and has been in steady decline since then. It has now been below the 2% target--and getting farther from the 2% target--for more than two years. As of December 2014, the inflation rate tipped negative. My suspicion is that this shift into deflation made the ECB decision to announce a large program of quantitative easing look relatively easy.

While I think the ECB is making the correct decision, I do worry about how the decision is viewed.
I'm of course a complete outsider to the EU policy process. But it seems to me that there is a tendency for political leaders and public discourse to often talk as if the European Central Bank has the power to fix Europe's unemployment and growth problems. The ECB can be part of a solution, and its actions may be necessary for a solution, but it isn't close to sufficient. In Draghi's press conference announcing the quantitative easing, he made this point a couple of times. For example, in his prepared remarks Draghi said:


Monetary policy is focused on maintaining price stability over the medium term and its accommodative stance contributes to supporting economic activity. However, in order to increase investment activity, boost job creation and raise productivity growth, other policy areas need to contribute decisively. In particular, the determined implementation of product and labour market reforms as well as actions to improve the business environment for firms needs to gain momentum in several countries. It is crucial that structural reforms be implemented swiftly, credibly and effectively as this will not only increase the future sustainable growth of the euro area, but will also raise expectations of higher incomes and encourage firms to increase investment today and bring forward the economic recovery. Fiscal policies should support the economic recovery, while ensuring debt sustainability in compliance with the Stability and Growth Pact, which remains the anchor for confidence. All countries should use the available scope for a more growth-friendly composition of fiscal policies.


In answer to a question later in the press conference, Draghi repeated:

Finally, let me add something here, because it’s actually quite important. What monetary policy can do, I’ve said this many times, but I think it is worthwhile repeating it. What monetary policy can do is to create the basis for growth, but for growth to pick up, you need investment. For investment you need confidence, and for confidence you need structural reforms. The ECB has taken a further, very expansionary measure today, but it’s now up to the governments to implement these structural reforms, and the more they do, the more effective will be our monetary policy. That’s absolutely essential, as well as the fiscal consolidation side. So structural reforms is one thing, budget and fiscal consolidation is a different issue. It’s very important to have in place a so-called growth-friendly fiscal consolidation for confidence strengthening. This combined with a monetary policy which is very expansionary, which has been and is even more so after our decisions today, is actually the optimal combination. But for this now, we need the actions by the governments ...  Speed is of the essence.

Maybe I'm just cynical, but I'm not expecting the European governments to follow up with a wave of structural reforms and "growth-friendly fiscal consolidation." I'd love to be proven wrong.