Where Will the Future Global Jobs Come From?

Economies all around the world need to create jobs. In part, this is to continue the process of recovery from the Great Recession. In part, it is to address expanding workforces in the countries that are still experiencing population growth. And and all around the world, jobs need to be created so that those who have unsatisfactory or insecure jobs have the prospect of something better. The International Labor Organization offers some background on these issues in the January 2015 issue of World Employment and Social Outlook: Trends 2015..

As a starting point: here is an overview of how the ILO sees the need for creating 280 million jobs worldwide in the next five years:


"[T]he global employment outlook will deteriorate in the coming five years. Over 201 million were unemployed in 2014 around the world, over 31 million more than before the start of the global crisis. And, global unemployment is expected to increase by 3 million in 2015 and by a further 8 million in the following four years. The global employment gap, which measures the number of jobs lost since the start of the crisis, currently stands at 61 million. If new labour market entrants over the next five years are taken into account, an additional 280 million jobs need to be created by 2019 to close the global employment gap caused by the crisis."

This estimate of a need for 280 million new jobs covers the unemployed and population growth, but from a global view, it seems a lowball estimate to me. The reason is that the ILO counts many people around the world as holding jobs in what it calls the "vulnerable employment" sector, which is defined as "own-account work and contributing family employment." Thus, a low-income subsistence farmer is counted as counted as holding a job.  The ILO writes: "[A]lmost half of the world’s employed population are still working in vulnerable conditions, pre-dominantly women, and are thus prevented from accessing basic necessities and decent work. ... In particular, nearly eight out of ten employed persons in Sub-Saharan Africa were in vulnerable forms of employment. Accordingly, the vulnerable employment rate – the share of own account workers and unpaid family workers in total employment – was estimated at 76.6 per cent in 2014, significantly higher than the global average of 45.3 per cent, and followed closely by South Asia at 75.6 per cent." 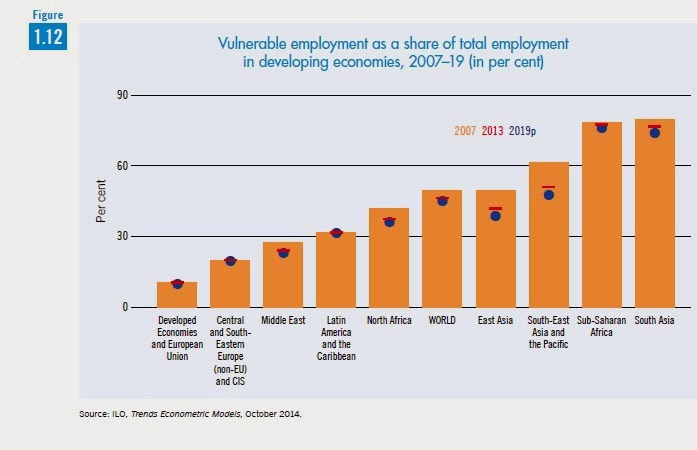 It is of course impossible to specify in advance where hundreds of millions of new jobs going to come from. But it is possible to identify where they are most likely to come from--and to note some challenges posed by this answer.

Within the private sector, it seems highly unlikely that hundreds of millions of new jobs are going to be generated in the manufacturing sector. The reason lies in what the report calls the theory of "premature industrialization." In past episodes of economic development around the world, a common progression has been for workers to move from agricultural jobs to low-skilled manufacturing jobs, and then on to higher-skilled manufacturing jobs and service jobs. However, in a world of high-technology, many countries without especially high income levels seem to have already seen a peak in their manufacuturing  jobs--and the peak level of manufacturing jobs seems to be happening at lower levels of the workforce.

Here's a figure from the ILO report, where the point for each country shows the year on the horizontal axis in which the share of manufacturing workers in its economy was at its peak, while the vertical axis shows what that peak level was. For example, in the upper left of the figure manufacturing jobs in Argentina peaked at about 24% of the workforce in 1992. As the figure shows, it's common for manufacturing jobs to peak at around 15% of the workforce, and that level seems to be on average declining over time (as shown by the yellow line). 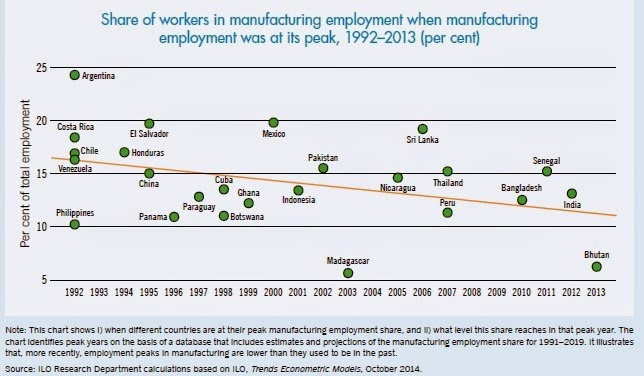 So what is left? Service jobs. The ILO writes:


"The bulk of new jobs are being created in private sector services, which will employ more than a third of the global workforce over the next five years ... Public services in health care, education and administration will also see smaller increases, still reaching more than 12 per cent of total employment. In contrast, industrial employment is expected to stabilize globally at slightly below 22 per cent of total employment, mainly driven by a continuous rise in employment in construction whereas manufacturing industries continue to lose jobs. The advanced economies still account for the largest share of manufacturing jobs across the globe, but current trends will bring their employment share to below 12 per cent by the end of 2019. Some emerging countries
have also seen a fall in their share of manufacturing employment, despite the fact that their manufacturing industries have not yet reached levels similar to those in advanced economies. In general, industrial employment is not likely to contribute strongly to employment recovery, despite its important role in structural transformation particularly in the emerging economies. Rather, service sector employment will remain the most dynamic area of job creation over the next five years."

The jobs question all around the world is the extent to which service-sector jobs can provide a broad base of careers for a wide range of skill levels. As the ILO notes in discussing the idea of premature deindustrialization, "the extent to which services can take over the role of manufacturing and facilitate the convergence of developing to developed countries is still under scrutiny ..." In high-income countries, there are concerns that service industry jobs can tend to be polarized, with options for low-skill workers who do service jobs where a physical presence is needed, and high-skill workers who make heavy use of information and communications technology, but a hollowing out of options for the middle class.

The question of how new technologies might be combined with workers of all skill levels to create middle-class career paths for the future will manifest itself in very different ways in countries all around the world. But in every country, it's one of the fundamental challenges for the global economy in the next few decades.