On November 2, 1983, President Ronald Reagan signed the leglslation establishing a federal holiday for the birthday of Martin Luther King Jr., to be celebrated each year on the third Monday in January. As the legislation that passed Congress said: "such holiday should serve as a time for Americans to reflect on the principles of racial equality and nonviolent social change espoused by Martin Luther King, Jr.." Of course, the case for racial equality stands fundamentally upon principles of justice, not economics. But here are three economics-related thoughts for the day drawn from past posts.


1) Inequalities of race and gender impose large economic costs on society as a whole, because one consequence of discrimination is that it hinders people in developing and using their talents. Here's a reprint of a post on the subject of "Equal Opportunity and Economic Growth" from this blog  (August 20, 2012). 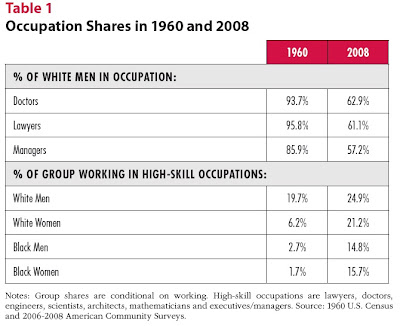 2) Extensions in the period of copyright over time have meant that the speeches and writings of Martin Luther King Jr. and others in the U.S. civil rights movement are not easily available to, say, students in schools or the general public. This was one example I discussed in a post on "Absurdities of Copyright Protection" (May 13, 2014). The post discusses a paper by Derek Khanna called  "Guarding Against Abuse: Restoring Constitutional Copyright," published as R Street Policy Study No. 20 (April 2014). Here, I'll just quote a couple of paragraphs from Khanna.

Excessively long copyright terms help explain why Martin Luther King’s “I Have a Dream” speech is rarely shown on television, and specifically why it is almost never shown in its entirety in any other form. In 1999, CBS was sued for using portions of the speech in a documentary. It lost on appeal before the 11th Circuit. If copyright terms were shorter than 50 years, then those clips would be available for anyone to show on television, in a documentary or to students. When historical clips are in the public domain, learning flourishes. Martin Luther King did not need the promise of copyright protection for “life+70” to motivate him to write the “I Have a Dream” speech. (Among other reasons, because the term length was much shorter at the time.) ...

Eyes on the Prize is one of the most important documentaries on the civil rights movement. But many potential younger viewers have never seen it, in part because license requirements for photographs and archival music make it incredibly difficult to rebroadcast. The director, Jon Else, has said that “it’s not clear that anyone could even make ‘Eyes on the Prize’ today because of rights clearances.” The problems facing Eyes on the Prize are a result of muddied and unclear case law on fair use, but also copyright terms that have been greatly expanded. If copyright terms were 14 years, or even 50 years, then the rights to short video clips for many of these historical events would be in the public domain.


3) For those who would like to know more about the economics of thinking about cause-and-effect in discrimination issues, a starting point might this post with discussion of an interview with Glenn Loury (July 2, 2014). Here's a slice of the discussion from that post:
_____

A standard approach to studying discrimination in labor markets is to collect data on what people earn and their race/ethnicity or gender, along with a number of other variables like years of education, family structure, region where they live, occupation, years of job experience, and so on. This data lets you answer the question: can we account for differences in income across groups by looking at these kinds of observable traits other than race/ethnicity and gender? If so, a common implication is that the problem in our society may be that certain groups aren't getting enough education, or that children from single-parent families need more support--but that a pay gap which can be explained by observable factors other than race/ethnicity and gender isn't properly described as "discrimination." Loury challenges this approach, arguing that many of the observable factors are themselves the outcome of a history of discriminatory practices. He says:

"By that I mean, suppose I have a regression equation with wages on the left-hand side and a number of explanatory variables—like schooling, work experience, mental ability, family structure, region, occupation and so forth—on the right-hand side. These variables might account for variation among individuals in wages, and thus one should control for them if the earnings of different racial or ethnic groups are to be compared. One could put many different variables on the right-hand side of such a wage regression.
Well, many of those right-hand-side variables are determined within the very system of social interactions that one wants to understand if one is to effectively explain large and persistent earnings differences between groups. That is, on the average, schooling, work experience, family structure or ability (as measured by paper and pencil tests) may differ between racial groups, and those differences may help to explain a group disparity in earnings. But those differences may to some extent be a consequence of the same structure of social relations that led to employers having the discriminatory attitudes they may have in the work place toward the members of different groups.

So, the question arises: Should an analyst who is trying to measure the extent of “economic discrimination” hold the group accountable for the fact that they have bad family structure? Is a failure to complete high school, or a history of involvement in a drug-selling gang that led to a criminal record, part of what the analyst should control for when explaining the racial wage gap—so that the uncontrolled gap is no longer taken as an indication of the extent of unfair treatment of the group?

Well, one answer for this question is, “Yes, that was their decision.” They could have invested in human capital and they didn’t. Employer tastes don’t explain that individual decision. So as far as that analyst is concerned, the observed racial disparity would not be a reflection of social exclusion and mistreatment based on race. ... But another way to look at it is that the racially segregated social networks in which they were located reflected a history of deprivation of opportunity and access for people belonging to their racial group. And that history fostered a pattern of behavior, attitudes, values and practices, extending across generations, which are now being reflected in what we see on the supply side of the present day labor market, but which should still be thought of as a legacy of historical racial discrimination, if properly understood.