At least, this is the case made by Alexandre Dormeier Freire in a boxed commentary appearing in the Global Wage Report 2014-2015, from the International Labour Organization. Friere writes (citations omitted):

Economists sometimes represent the middle class as an average class located in an interval of 75 per cent to 125 per cent of the median income. But most authors agree that great heterogeneity characterizes the middle class. Consequently, notions such as lower middle class, upper middle class and even old vs new middle class have appeared, conveying a certain difficulty in providing an accurate and precise definition. When it comes to emerging and developing economies, authors are confronted with the difficulty of applying a notion that is linked to the Western context. Ravallion simply considers that “someone is middle class if that person would not be considered poor in any developing country, implying a lower bound of $9 a day.”

From an economic point of view, the middle class is considered the driver of modern consumption societies. From a sociological perspective, the formation of a social class includes other factors: a specific economic position (possibly creating conflicts of interest with other social classes) and a consciousness of having similar conditions. Today in Western societies, relatively high levels of consumption of goods and services define, or are a major attribute of, the middle class. Some identify this increasing consumption as consumerism and argue that this profoundly changes traditional social relations within the middle class because people tend to be more individualistic than class-oriented, and social relations are driven by more hedonistic and individualistic patterns. In this view, both factors contribute to the erosion of the class identity in all societies. In emerging and developing economies, such consumption is still perceived more as a privilege of the upper middle class than as a unifying social force, as in Western-based societies.

To flesh this out a bit, results from a Pew Foundation survey back in 2012 showed how Americans categorized themselves. Notice that only 7% of Americans identify themselves as "lower class" and only 2% as "upper class." Apparently, the "middle class" includes 91% of the U.S. population. 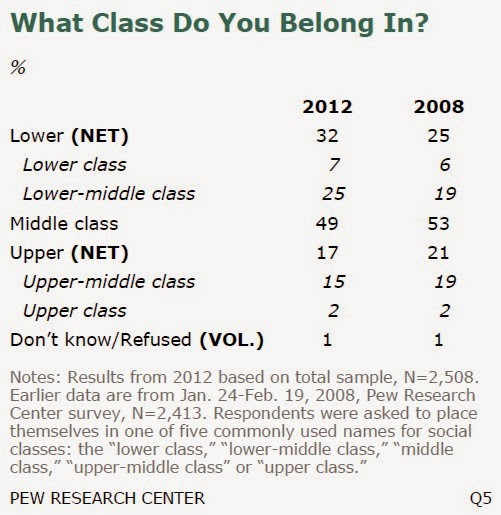 How does this differ for lower-income countries? In its Global Employment Report 2013, the ILO categorizes the population of low-income countries by the fairly standard measures of "extremely poor," which consumption of less than $1.25 per person per day; "moderately poor," from $1.25 to $2 per day; near-poor, from $2 to $4 per day; "middle class," between $4 and $13 per day; and "above middle class," which is above $13 per day in consumption. By this standard, the "middle class" in the developing world is on the rise, but is not yet more than half the population. 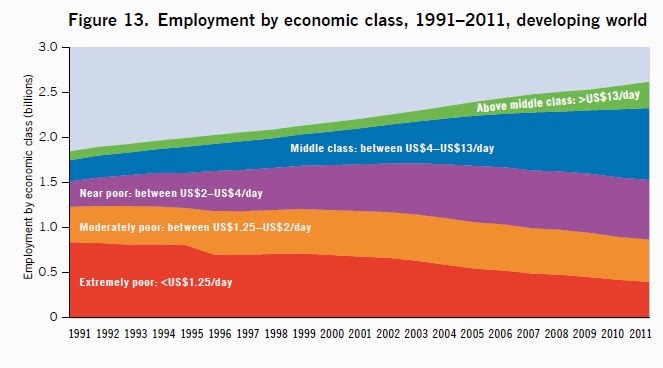 The ILO report sums up the patterns this way:

But in a rough-and-ready way, I think the key factor in defining the middle class may be a sense of whether your life typically involves living from week-to-week or month-to-month relying on a regular paycheck. For example, I think that the reason many objectively low-income people in the U.S. view themselves as "middle class" is that they are working for livilng. Similarly, high-income people in the U.S. view themselves as "middle class" because they have bought into a world of high expenses, and thus they also feel an ongoing pressure that they are working to pay their regular expenses.  In low-income countries, the key step that often moves people up to the "middle class" is a regular job with a paycheck, as opposed to holding a series of ad hoc, temporary, and subsistence jobs.

Full disclosure: I was an outside reader of the ILO Global Wage Report 2014-15 last summer, and received a modest honorarium for commenting on a draft of the report.
Posted by Timothy Taylor at 8:00 AM