What do lower oil prices mean for the world economy? The World Bank offers an overview in one section of Chapter 4 of its January 2015 Global Economic Prospects report. Here are some points that caught my eye.

The recent drop in oil prices is large, a drop of almost 50% over the last six months of 2014 from slightly over $100/barrel of crude oil to about $50/barrel. However, drops of similar magnitude are not uncommon. The World Bank notes:


Between 1984-2013, five other episodes of oil price declines of 30 percent or more in a six-month period occurred, coinciding with major changes in the global economy and oil markets: an increase in the supply of oil and change in OPEC policy (1985-86); U.S. recessions (1990–91 and 2001); the Asian crisis (1997–98); and the global financial crisis (2007–09). There are particularly interesting parallels between the recent episode and the collapse in oil prices in 1985-86. After the sharp increase in oil prices in the 1970s, technological developments made possible to reduce the intensity of oil consumption and to extract oil from various offshore fields, including the North Sea and Alaska. After Saudi Arabia changed policy in December 1985 to increase its market share, the price of oil declined by 61 percent, from $24.68 to $9.62 per barrel between January-July 1986. Following this episode, low oil prices prevailed for more than fifteen years.

Here's a graph comparing recent drops in oil prices in the last 30 years. 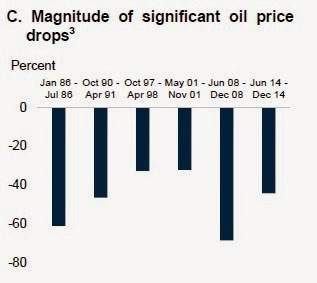 For a longer-term comparison, here's a graph taken from the BP Statistical Review of World Energy 2014. Focus here on the lighter green line, which is adjusted for inflation. This graph is from last summer, so it doesn't show the recent drop of oil prices to the $50/barrel range. Still, you can see at a glance that even after falling to $50/barrel, the current drop doesn't come close (yet!) to matching what happened in the 1980s. 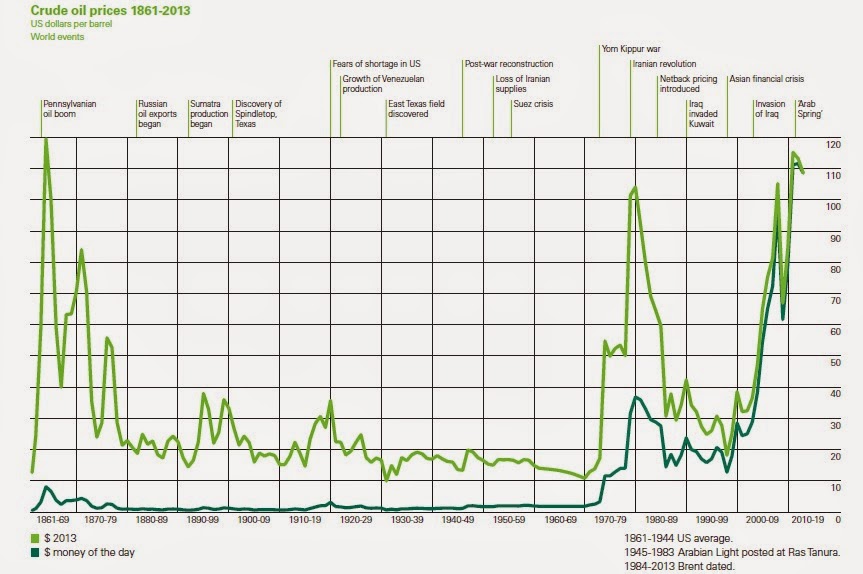 What's the explanation for the fall in oil prices? Through 2014, U.S. shale production has continually exceeded expectation, while forecasts of global demand for oil have been scaled back. OPEC announced in November 2014 that it would not scale back production, thus apparently opting to keep its market share rather than to push the price of oil back up. There had been concerns that oil output might fall sharply in places like Iraq and Libya (because of local wars) and in Russia (because of potential economic sanctions), but neither seemed to cause oil output to decline as feared. The appreciation of the U.S. dollar also had an effect: "In the second half of 2014, the U.S. dollar appreciated by 10 percent against major currencies in trade-weighted nominal terms. A U.S. dollar
appreciation tends to have a negative impact on the price of oil as demand can decline in countries that experience an erosion in the purchasing power of their currencies."

Of course, a drop in the price of oil tends to benefit those who are buyers, including households and industries that use energy, while imposing costs on those who are sellers, like producers of oil. At a national level, the World Bank puts it this way (citations omitted):


Empirical estimates suggest that output in some oil-exporting countries, including Russia and some in the Middle East and North Africa, could contract by 0.8–2.5 percentage points in the year following a 10 percent decline in the annual average oil price. ...  In some countries, the fiscal pressures can partly be mitigated by large sovereign wealth fund or reserve assets. In contrast, several fragile oil exporters, such as Libya and the Republic of Yemen, do not have significant buffers, and a sustained oil price decline may require substantial fiscal and external adjustment, including through depreciation or import compression. Recent developments in oil markets will also require adjustments in macroeconomic and financial policies in other oil-exporting countries, including Russia, Venezuela, and Nigeria. ...

A 10 percent decrease in oil prices would raise growth in oil-importing economies by some 0.1–0.5 percentage points, depending on the share of oil imports in GDP. ... In Brazil, India, Indonesia, South Africa and Turkey, the fall in oil prices will help lower inflation and reduce current account deficits—a major source of vulnerability for many of these countries. Their fiscal and current accounts could see substantial improvements.