In the 2010 Annual Report of the Globalization and Monetary Policy Institute at the Dallas Fed, Janet Koech has an essay on Africa--Missing Globalization's Rewards? Compared with growth stories like China and India, economic growth in Africa remains anemic. Yet I've been wondering for a few years, based on little hints here and there, whether economic growth in Africa countries might be picking up. The modest upturn in Africa's exports and foreign direct investment since about 2000 as a share of world totals are one such hint: 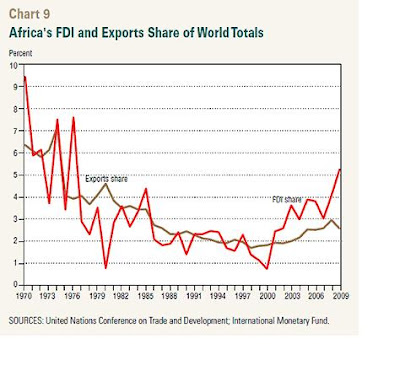