What Would Uninsured Americans Pay for Health Insurance?

One of the big questions about Americans without health insurance is how much of a subsidy they would need in order to purchase such insurance willingly. The existing evidence on this point isn't especially on-point: for example, it sometimes involves looking across firms at the generosity of the health insurance policies that they offer, then looking at how many employees take up policies at each firm, and then drawing conclusions about the price people are willing to pay for insurance coverage. It's not clear how results from such studies would extrapolate to buying health insurance directly.


Alan Krueger and Ilyana Kuziemko tackle this question with survey data in a recent working paper. The Gallup Poll included some questions that they wrote in daily polling during late August and early Septemer 2008. The opening question took the form: "If you could get a health insurance policy for yourself that is as good as the one that members of Congress have, given yourcurrent fi nancial situation, would you buy it for $X a year, which works out to $X/12 per month?" As they explain, individuals were randomly assigned different starting values for X, and then if individuals said "no," they were asked a series of follow-up questions with a lower X. The survey also asked lots of other questions, so it was possible to figure out who was uninsured, along with health status and other useful variables. Based on this data, they calculated a demand curve for subsidized health care which looks like this: 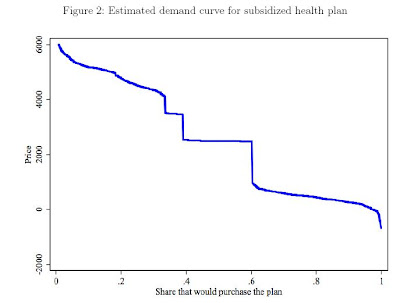 They write: "Our results suggest that subsidizing the purchase of insurance plans would signi ficantly reduce the population of the uninsured. For example, we estimate that about sixty percentof the uninsured would voluntarily enroll for an annual premium of $2,000. Under the current specfii cation of subsidies in the ACA [the Affordable Care Act of 2010], we estimate that over 75 percent of uninsured adults would enroll, implying that some 39 million uninsured individuals would gain coverage as a result of the law. We also estimate that stripping the individual mandate fromthe law|the constitutionality of which is being challenged in federal court|would lead to between 7 and 12 million fewer individuals gaining coverage."

Of course, as the authors' recognize and try to address in various ways, there's always reason to be dubious about survey evidence: it's easier to say that you would buy insurance at a certain price than actually to buy it. But as part of an accumulation of evidence on what it would take to cover the uninsured, the results struck me as intriguing.