James D. Hamilton has short essay in the "Research Summaries" section of the NBER Reporter on "Oil Price Shocks."

In one interesting figure, he compares oil price shocks of 1862-1865, 1973-1981, and 2002-2009. He argues that a common factor in each of these episodes (not the only factor!) was "declining production from the maturing oilfields on which the world had been depending at the time": specifically, the decline of the Pennsylvania oil fields in the 1860s, the decline of U.S. oil production starting in the 1970s, and the fall in oil production from mature oil fields in the North Sea and in Mexico in recent years. 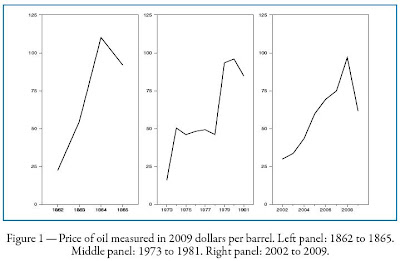 Hamilton also argues that "in fact all but one of the 11 U.S. recessions since World War II were preceded by a sharp increase in the price of crude petroleum," and presents an intriguing table showing some patterns for the five recessions before the Great Recession.