More on Stagnant Job Growth in the Middle East

I wrote a couple of weeks ago about slow growth and stagnant job creation in the Middle East. In the most recent issue of Finance and Development, Yasser Abdih offers some additional evidence.

Focus on six populous Middle Eastern countries where solid labor market data is available: Egypt, Jordan, Lebanon, Morocco, Syria, and Tunisia. Abdih writes: "High unemployment in these countries, together with low labor force participation rates, has resulted in very low ratios of employment to working-age population. With less than 45 percent of working-age people actually employed, this regional rate is the lowest for any region in the world." 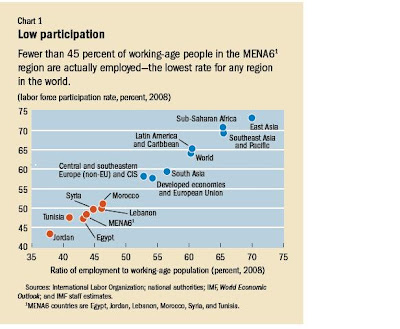 When you look at youth employment in particular, the situation is equally dismal. They write:"The average unemployment rate among youth in these nations was 27 percent in 2008, higher than in any other region in the world ...  In contrast to most of the world, joblessness in many Middle Eastern countries tends to increase with schooling: the unemployment rate among those with college degrees exceeds 15 percent in Egypt, Jordan, and Tunisia." 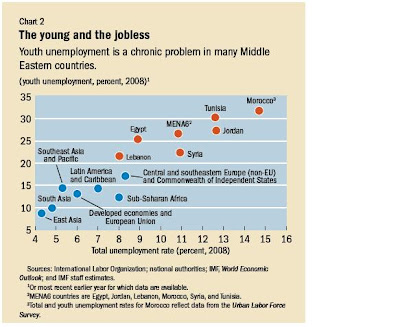