The figure, taken from the annual report of the Social Security actuaries released in May 2011, tells the story.  Up until 2011, the "non-interest income" for the Social Security trust fund--which basically means payroll taxes--exceeded the costs of the system. Under the rules of federal budget accounting, Social Security was providing extra funds that could be used to purchase Treasury bonds, and thus reduced the amount size of the budget deficit that needed to be financed by borrowing from the public.After 2011, however, the costs of the system are slated to exceed non-interest income. Under federal budget accounting rules, now each year the rest of the budget will need to repay the Social Security trust fund. . 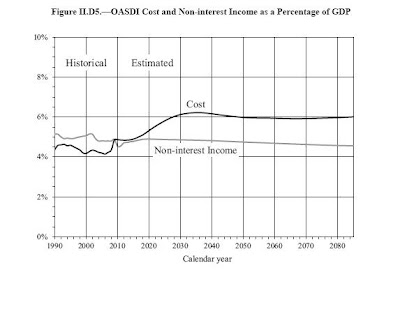