Switching from a fuel tax to a vehicle-miles tax to finance highways?

The U.S. government imposes a tax of 18.4 cents/gallon on gasoline as a main source of financing for the Highway Trust Fund. However, the tax rate hasn't been raised since 1993, so inflation has eaten away at its real value. In addition, as fuel economy improves, miles travelled are rising faster than fuel consumption. Thus, the Highway Trust fund has been spending roughly $10 billion more per year since 2008 on highway projects than the fuel tax takes in. Thus, there have been proposals to switch from a fuel tax to a vehicle-miles tax as a way of funding highways. Here are a some thoughts about this policy:
1) Both a fuel tax and a vehicle-miles tax can be viewed as user fees--that is, those who use the roads are paying for their maintenance and upkeep.
2) A vehicle-miles tax would probably raise more money than fuel tax over time, because vehicle-miles are rising more than fuel consumption. In the Winter 2010-2011 issue of the Rand Review, Paul Sorenson, Liisa Ecola, and Martin Wachs illustrate this point with a figure. 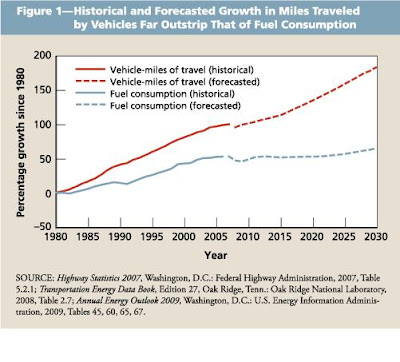 3) The administrative apparatus for collecting the fuel tax is in place, and there are severe issues with how a vehicle-miles tax would be implemented. Sorenson, Ecola, and Wachs write:  “Mileage-based road use fees could be implemented in various ways, but three options appear to offer the greatest promise: (1) estimating mileage based on a vehicle’s fuel economy and fuel consumption, (2) metering mileage based on a device that combines cellular service with a connection to the onboard diagnostics port, and (3) metering mileage based on a device that contains a global positioning system (GPS) receiver." The first method seems a little rough-and-ready, and might need to be collected once a year, perhaps when auto registration is renewed. It would be much more visible to the public than the existing fuel tax. The other two methods raise legitimate privacy concerns: should the government really have the power to track where all cars have gone? One way or another, collection costs are likely to be higher for a new vehicle-miles tax.

4) A vehicle-miles tax does not reward driving a fuel-efficient automobile--which may help the poor.             The Congressional Budget Office published in March 2011 a comparison of a vehicle-miles tax vs. the existing fuel tax in “Alternative Approaches to Funding Highways.” “VMT taxes are qualitatively similar to fuel taxes in their implications for equity. Like fuel taxes, they satisfy the user-pays principle, but they impose larger burdens relative to income on people in low-income or rural households. However, to the extent that members of such households tend to drive vehicles that are less fuel efficient, such as pickup trucks or older automobiles, those highway users would pay a smaller share of VMT taxes than of fuel taxes.”
5) Trying to sort out the relevant externalities is tricky. The CBO suggests that costs imposed by highway users can be divided up into costs more related to miles travelled and costs more related to fuel use. "Mileage-related costs, which include the costs associated with pavement damage, congestion,
accidents, noise, and emissions of local air pollutants by passenger vehicles, in fact account for the majority
of total costs. (The costs associated with local air pollution from passenger vehicles are considered mileage
related because those emissions, unlike emissions from trucks, are regulated on a per-mile basis.) Fuel-related costs include the costs of local air pollution from trucks, climate change, and dependence on foreign oil." I'm not sure that a single policy can sensibly address costs of road maintenance and construction, environmental costs of fossil fuels, and costs of congestion. Trucks are much harder on pavement than cars. Contributions to congestion depend on when and where you drive. Pollution is affected by the type of car you drive, not just by miles traveled.
Here's a useful CBP table summarizing arguments about taxes on fuel versus taxes on vehicle miles traveled. 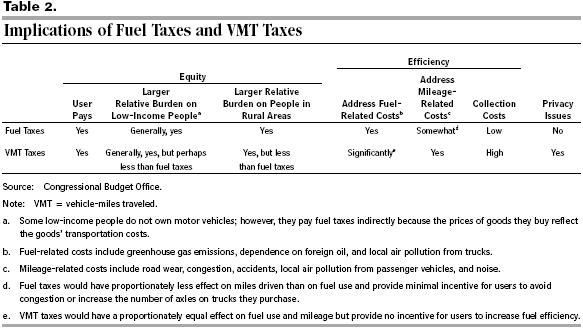