The Global Commission on Drug Policy seems to be a more-or-less self-appointed group of "world leaders," including former Presidents of Brazil , Colombia, Mexico and Switzerland, along with Kofi Annan, Richard Branson, George Shultz, Paul Volcker, and others. Its Report is a call to "end the criminalization, marginalization and stigmatization of people who use drugs but who do no harm to others."

The report has facts, comparison studies, and citations that should make it of interest to those on all sides of this issue. For example, you can get a quick overview of areas that have decriminalized or legalized use and possession of various drugs, including Portugal, which in 2001 "became the first European country to decriminalize the use and possession of all illicit drugs."

One figure that interested me showed the rise in consumption in certain well-known illegal drugs in the last decade or so. 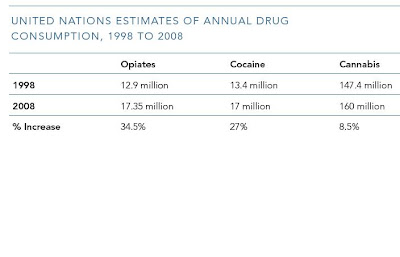 Another figure shows a ranking of psychoactive drugs according the actual and potential harms they could cause to society, as defined by a team of scientists publishing in The Lancet a few years ago. The color classifications, on the other hand, represent the seriousness with which each of these drugs are treated in international treaties. Thus, heroin and cocaine are ranked as highly risky, and international law treats them that way. But the items ranked fourth, fifth, and eighth on the list by the experts--alcohol, ketamine, and tobacco--are not subject to international control. Like many aspects of drug policy, it's one of those things that makes you go hmmmm. 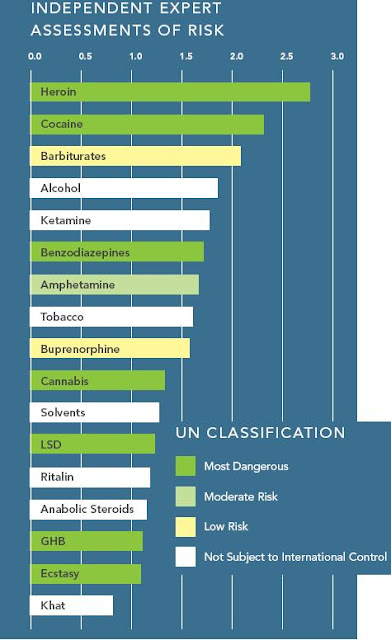 Thanks to Larry Willmore's "Thought du Jour" blog for the pointer.