How much are automatic stabilizers affecting current deficits?

When the economy hits a recession, tax revenues drop automatically, without any change in legislation. Spending on certain programs to help those in need rises automatically, as more people draw on those programs, without any change in legislation. How much of the current budget deficits are due to discretionary changes in tax or spending policy, and how much to these kinds of automatic changes?

The Congressional Budget Office addresses this question in an April 2011 report. The dark blue line shows the actual budget deficits and surpluses. The light blue line shows what the budget deficits or surpluses would have been if the automatic stabilizers had not occurred. Thus, the gap between the two lines is the measure of the effect of the automatic stabilizers. 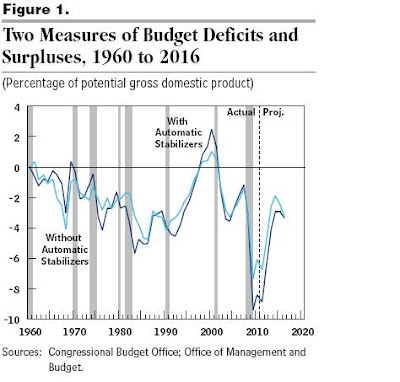 It's also interesting to note that the budget surpluses of the late 1990s were made larger because of automatic stabilizers: that is, the unsustainably booming economy of that time brought in extra tax revenue and held down the need for supportive social spending in those years.