The official federal budget projections are dishonest. They make future budget deficits look smaller by enacting spending cuts and tax increases that won't kick in for some years--but then then Congress and the President postpone or eliminate those changes before they actually take place. As a result, the nonpartisan Congressional Budget Office has for some years offered two sets of budget projections: the "extended baseline scenario" is based on what current law says will happen in the next 10 years; the "alternative fiscal scenario" assumes that certain changes aren't going to be made, and thus probably presents a more realistic picture. The CBO's 2011 Long-Term Budget Outlook shows the difference.

Start with the basic projection of how much debt the U.S. economy will accumulate in the next 25 years. The "extended baseline scenario" says that the rise in the debt/GDP ratio has pretty much topped out at this point, and will rise to a little over 80% of GDP by 2035. The "alternative fiscal scenario" is much more grim, suggesting that the debt/GDP ratio would approach 200% of GDP by 2035. Just to be clear, this forecast doesn't mean that the U.S. government would actually be able to borrow this much--only that we are on a debt accumulation path that looks unsustainable. 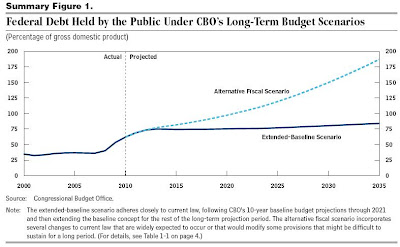 What are the different underlying assumptions here? Take a look at the different paths of taxes and spending in the two scenarios. 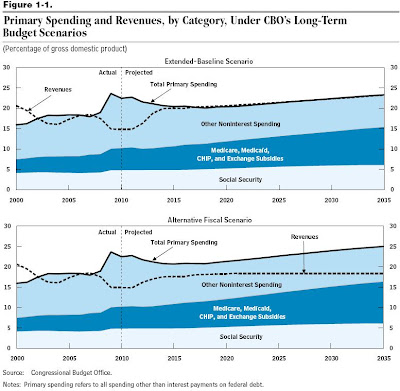 On the tax side, the "extended baseline" scenario has a bunch of tax increases arising in future years: for example, the expiration of the Bush tax cuts of the early 2000s, a gradual rise in the revenues collected by the alternative minimum tax, and others. As a result, it is based on federal taxes collecting 23% of GDP by 2035--far above the level seen in recent decades. In contrast, the "alternative fiscal scenario" is that federal taxes in the long-term will be more-or-less at their historical average for the last few decades of 18% of GDP.

On the spending side, both scenarios show that in the future, when you are asked for a short description of what the federal government actually does, the appropriate answer will be "retirement and health care spending." The two scenarios don't differ in projected Security spending. In Medicare spending, the "extended baseline scenario" incorporates cuts to physician pay in the future; the "alternative fiscal scenario" says that physician pay will remain at 2011 levels. Also, in the "extended baseline scenario," CBO explains that "government spending on everything other than the major mandatory health care programs, Social Security, and interest on federal debt—activities such as national defense and a wide variety of domestic programs—would decline to the lowest percentage of GDP since before World War II." In the alternative scenario, these other areas of government spending remain at the current levels as a share of GDP.The other big spending difference is that the "primary spending" lines shown here leave out interest payments on past borrowing, which grow MUCH larger with the larger deficits in the the "alternative fiscal scenario."

Of course, one can quibble with the details of what is assumed in the "alternative fiscal scenario." But from where I sit, the official budget predictions in the "extended baseline scenario" look intentionally misleading, and the CBO is performing a public service by offering more plausible projections.