Long-Term Unemployment in the U.S.

Andreas Hornstein and Thomas A. Lubik of the Richmond Fed write about "The Rise in Long-Term Unemployment: Potential Causes and Implications." They define long-term unemployment as lasting more than 26 weeks. They write: “The share of long-term unemployment [as a proportion of total unemployment]  peaked at 46 percent in the second quarter of 2010, and averaged a bit more than 43 percent for all of 2010. This peak value for the share of long-term unemployment is significantly higher than the previous peak of 26 percent that was attained following the 1981–82 recession. Finally, mean duration of unemployment had increased to about 35 weeks by the middle of 2010, again a substantial increase over the previous peak for mean unemployment duration of 21 weeks after the 1981–82 recession. Never before in the postwar period have unemployed workers been unemployed for such a long time.” 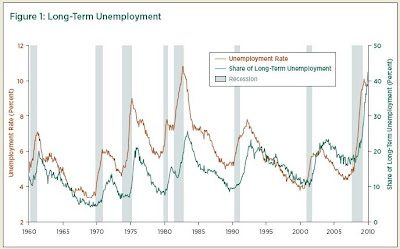 Much of the rise in overall unemployment is due more people entering long-term unemployment than in the past, and to those who have been long-term unemployed having a harder time finding jobs than in the past. This is a potentially major change for the U.S. economy. This figure shows that over the 1968 to 2006 period, U.S. workers were employed in any given month had one of the highest chances compared to other countries of losing that job in that month, but at the same time, a U.S. worker who was unemployed in any given month also had the highest chance of finding a job that month compared to other countries. 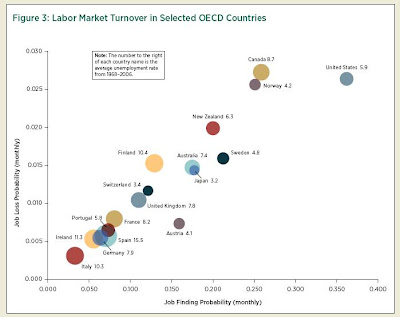