For a summit of the Group of Eight on May 27, 2011, the staff of the IMF produced a useful memo on the economies of the Middle East and North Africa (MENA) region: "Economic Transformation in MENA: Delivering on the Promise of Shared Prosperity." The fundamental issue for the region, as I see it, is that unemployment rates are very high and economic growth rates are low. Moreover, the region barely participates in the global economy, other than oil, and has a poor climate for starting businesses. So it's not clear where future growth in jobs will come from. Here are figures to illustrate these themes:

Per capita economic growth has been slow in this region from 1980 to 2010, compared to Asia, Latin America, and even Africa. 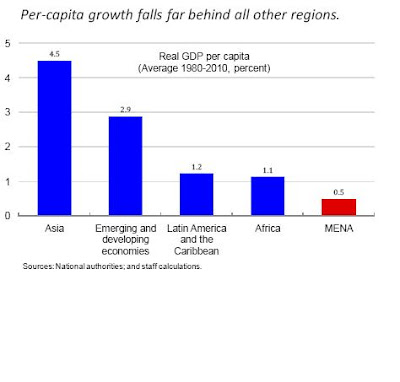 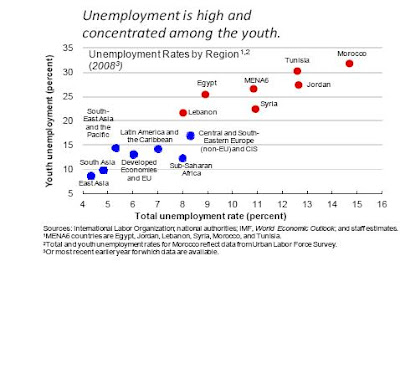 Other than oil, this region participates little in globalization. The top lines show non-oil export as a share of world exports for emerging Asia and for all emerging and developing economies. The bottom line, down around 1-2%, is the share of non-oil world exports for the Middle East and North Africa region. 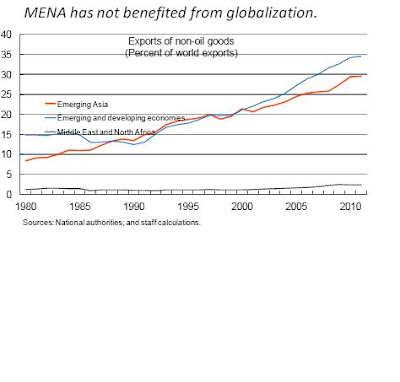 The business climate for the Middle East and North Africa region isn't strong. In this "spider web" diagram, each of the labels around the outside shows a measure of  how easy it is to do business in an area, based on World Bank data. The countries of the world are ranked on these criteria, and lower rankings are better. The dashed line shows the average country ranking for emerging Asia on these measures; the dark blue line shows the average ranking for oil importing countries in the Middle East and North Africa. 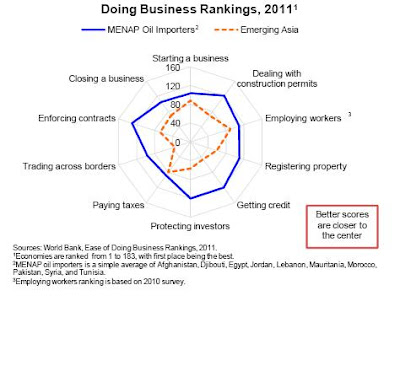 Posted by Timothy Taylor at 3:00 PM