Will China Catch Up to the U.S. Economy?

Mark A. Wynne of the Dallas Fed asks: "Will China Ever Become as Rich as the U.S.?" The standard answer here is that the total size of China's economy may well exceed that the total size of the U.S. economy within a couple of decades, but because China has nearly four times the U.S. population, it will take much longer for China to catch up in per capita terms.


Wynne writes: "The simplest approach is to measure GDP in U.S. dollars at 2005 prices and use 2005 exchange rates. Doing so results in estimated 2010 Chinese GDP of $3.88 trillion in 2005 dollars, or just less than 30 percent of U.S. GDP. China's economy will exceed that of the U.S. in 2025 if it continues expanding at its past-decade rate of just more than 10 percent a year and the U.S. keeps growing at the 1.7 percent annual rate it experienced during the period. Per capita GDP allows us to compare the relative well-being of residents of the two nations. Based on the 2010 U.S. population of 309 million, per capita GDP was $42,874 last year. China, with a 2010 population of 1.34 billion, had per capita GDP of $2,893 last year, or 6.7 percent of the U.S. figure."
Of course, it is not inevitable that China will continue at this rapid rate of growth for the next several decades. Wynne points out that on average, countries with lower per capita GDP have faster growth rates. However, it also seems to be true that as countries reach some level of middle-income, their growth rates slow down. On explanation for this "middle income trap" is that the growth policies that help in catch-up growth do not work as well as an economy reaches higher-income levels.  Wynne offers a nice figure to illustrate how the G-7 economies caught up to the U.S. economy since 1950, at least to some extent, but then seemed to stop catching up up when they hit (very roughly) 80% of U.S. per capita GDP. The figure also puts China's growth path in perspective. 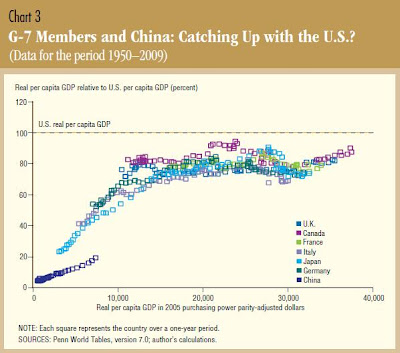 I wonder whether China isn't likely to experience more than one "middle income trap" as its economy expands. The Chinese pattern of growth in the last decade or so from a macro perspective has been based on extremely high savings rates, rapid growth in heavy manufacturing, large trade surpluses, and huge internal migration of labor. Over the years and decades to come, as these patterns evolve, China's economic growth will almost inevitably have some fits and starts.
Posted by Timothy Taylor at 2:02 PM