Setting up a discussion of the Obama stimulus package

Last week I gave a talk to an alumni group here at Macalester College about budget deficits in the short run and in the long run. For the short-run portion of this talk, I set up my discussion with two figures. I reproduce them here, in part for those who would like to cut-and-paste a copy for their own presentations. 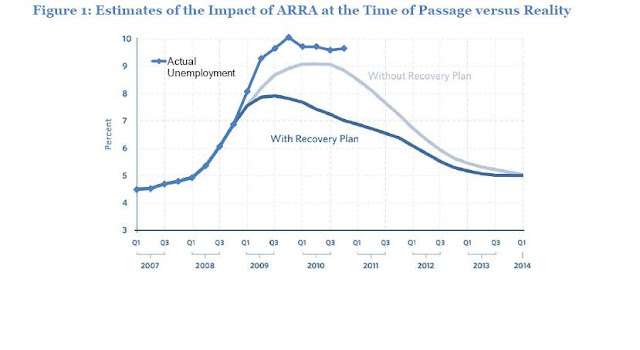 Of course, this figure is often used to argue that the stimulus didn't work. But of course, it is equally possible that the January 2009 forecast was too optimistic, and that the stimulus made the unemployment rate lower than it would otherwise have been.
The Congressional Budget Office publishes regular estimates of the effects of the ARRA legislation. The May 2011 report, for example, states that the legislation:

Here's a useful CBO figure for illustrating their case that the stimulus improved matters. 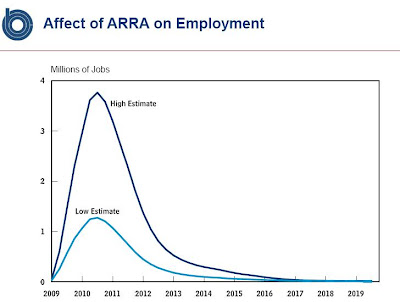 With these two figures to set up the discussion, one can then talk about what makes a stimulus package more or less effective in a variety of contexts. Is it timely, temporary and targeted? What about factors like the pre-existing level of debt, the extent to which the economy is open to international trade, the response of monetary authorities, and other factors?
In their NBER paper, Fehrer and Sacerdote summarize some of the conflicting evidence about the effects of the stimulus. Their own findings, as summarized in the abstracts are: "A cross state analysis suggests that one additional job was created by each $170,000 in stimulus spending. Time series analysis at the state level suggests a smaller response with a per job cost of about $400,000. These results imply Keynesian multipliers between 0.5 and 1.0, somewhat lower than those assumed by the administration. However, the overall results mask considerable variation for different types of spending. Grants to states for education do not appear to have created any additional jobs. Support programs for low income households and infrastructure spending are found to be highly expansionary. Estimates excluding education spending suggest fiscal policy multipliers of about 2.0 with per job cost of under $100,000."