Causes of Inequality: Supply and Demand for Skilled Workers

Last week I posted on how measures of U.S. income inequality have evolved over time. There, I ducked the question of why this has happened. In "The Undereducated American," a report that came out last month from the Georgetown University Center on Education and the Workforce, Anthony P. Carnevale and Stephen Rose offer a nice synopsis of the answer economists give most often.

They write: "The relative wages of college-educated workers have been rising much faster than the wages of
people with a high school diploma. The laws of supply and demand are the best single indicator of whether the United States is producing enough, too few, or too many college graduates. If the relative earnings of college-educated workers rise faster than the earnings of their counterparts, it means the demand is growing faster than supply. The data, therefore, are unequivocal—Americans are undereducated."

To illustrate this theme, they present a couple of useful figures from the 2008 book by Claudia Goldin and Larry Katz: The Race Between Education and Technology. The first figure shows how supply and demand of college-educated workers has evolved over time, compared to the 1970 levels. The general pattern is that demand for these skilled workers was ahead of supply in the 1920s, supply then went ahead of demand most of the time up until about 1980, and since then demand for skilled labor has outstripped supply. 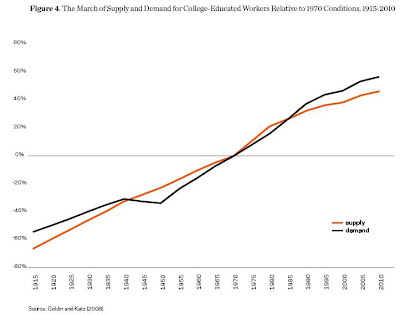 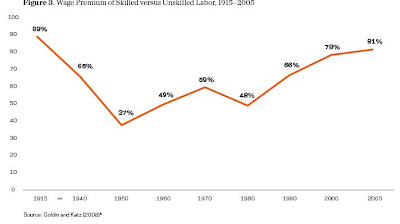 But while I'm sure this argument is a lot of the explanation for rising inequality, maybe most of the explanation, other issues play a role as well. For example, the demand for skilled and unskilled labor is also affected by factors like the great advances in information and communications technology in recent decades, and by the  ability of firms to outsource some kinds of production to other countries. In addition, the evidence on income inequality from my post last week suggests that a lot of the rise in inequality is because of gains going to the very top of the income distribution--not necessarily broadly distributed to all of those with a higher level of education. So puzzles about the causes of inequality remain.