How high is U.S. income inequality?

When looking for statistics on U.S. income inequality, my standard starting point is the data from the U.S. Department of the Census, which shows the share of income received by each quintile (that is, each fifth) of the income distribution, as well as the share received by the top 5% of the income distribution.
(Specifically, see Table F-2 at this link.)

The basic story is that the income distribution didn't move too much from the mid-1950s up to about the mid-1970s; indeed, when I was learning economics in college in the late 1970s and early 1980s, a rule of thumb was that the U.S. income distribution was essentially stable. But since then, the share of income going to the top fifth has risen substantially, from 40.7% of all income in 1975 to 48.2% of all income in 2009. That increase of 7.5 percentage points is almost all traceable to the top 5%, which saw its share of total income rise by 5.8 percentage points over this time--that is, from 14.9% of total income in 1975 to 20.7% of income in 2009. Over this time, the "fourth fifth" of the income got a slightly smaller share, and the bottom three-fifths all saw a substantial decline in their share of total income. 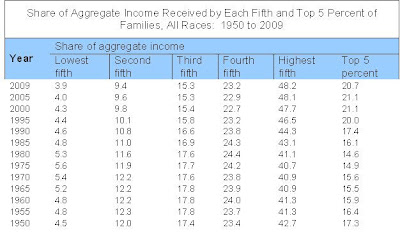 In an essay in the March 2011 issue of the Journal of Economic Literature, Anthony Atkinson, Thomas Piketty, and  Emmanuel Saez write about "Top Incomes in the Long-Run of History." (An ungated version of the paper is available at Saez's website here.) They use tax data to construct estimates of income inequality in the U.S. and other countries going back to early in the 20th century. The tax data isn't directly comparable to the Census data just mentioned, but it's the only reliable source of data on the very top of the income distribution going back this far in time. The paper is long and chock-full of insights, but here are a few of their basic facts on U.S. income equality over time. 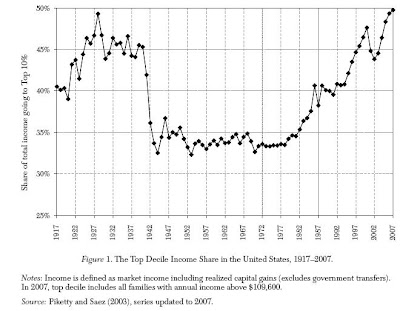 Now, break down that top tenth into three parts: the top 1%--the solid triangles in the graph; the next 4%-- that is, from the 95th up to the 99th percentile--which is the hollow triangles in the graph; and the next 5% after that--that is, from the 90th to the 95th percentile--which is the hollow diamonds in the graph. It turns out that most of the increase in the share of income received by the top 10% is actually a rise in the share being received by the top 1%. 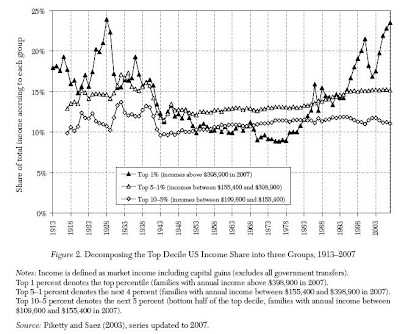 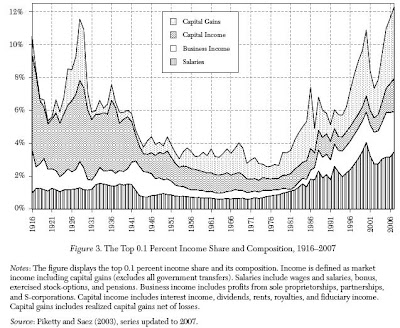 How bothersome is the level of inequality we have reached in the United States, and the concentration of that inequality in the extreme upper part of the income distribution? There is of course great controversy on this point. After all, these figures are annual snapshots, and don't show mobility across income levels between years. Probably the top 0.1% of the income distribution varies considerably from year to year, depending on which executives are cashing in a lifetime's worth of stock options in a single year. At the bottom end of the income distribution, income statistics don't take into account the value of "in-kind" transfers like Medicaid, Food Stamps, or vouchers for low-income housing. There are questions about how well tax data captures the overall income distribution at different historical points in time. There are a variety of arguments over why this trend toward great inequality has happened, many of them emphasizing how changes in information and communications technology have allowed those with high skills to increase their earnings.

For now, I'll duck these issues and controversies , and just let the fact that I think these data are worth presenting speak for itself. We can debate what the facts mean, but it IS a fact that in historical terms, U.S. income inequality is currently very high, about as high as it has been in the last century. It is also a fact that most of that change in inequality is because of a larger share of income going to the very top of the income distribution.

Posted by Timothy Taylor at 9:31 PM