The FDIC Changes the Base for Deposit Insurance

I confess that since the federal funds interest rate fell to near-zero in late 2008, I haven't paid much attention to it. But Todd Clark and John Lindner of the Cleveland Fed (pp. 5-7) offer a quick overview of some factors that have affected that rate since late 2010. In particular, they discuss a change I  probably should have known about, but had not: apparently, the Federal Deposit Insurance Corporation no longer uses bank deposits as the base for deposit insurance premiums, but now uses the difference between bank assets and bank equity as the base for deposit insurance. 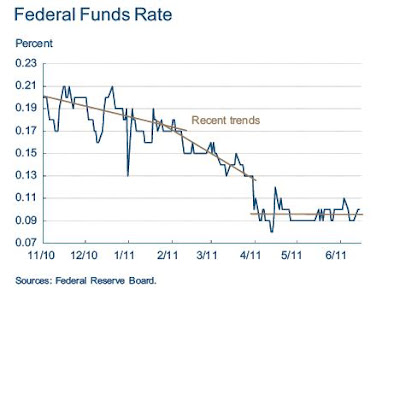 "Similarly, the decision by the Treasury in early February 2011 to wind down its Supplemental Financing
Account balance inserted more reserves into the market for cash investors to place. Combined with the asset purchases, this move accelerated the decline in the federal funds rate. This acceleration was reflected in another 4 basis point decline, from 17 basis points to 13 basis points, over the following two months."

"By far the most studied of the three events, however, has been the change in the FDIC assessment base for deposit insurance. Many observers have argued that this is the move that caused the dramatic
drop in the federal funds rate at the beginning of April, and it has also been credited for holding the
eff ective rate at a fairly constant level of 10 basis points."

"With the new FDIC assessment policy, insured depository institutions will be charged an insurance premium not on their amount of deposits, but on the difference between their total assets and their equity. Broadly speaking, this equates to their liabilities, but there are some subtleties that we are going to skip over. Due to the change in the assessment base, depository institutions are now forced to pay an extra fee for any financed assets, including funds that they might borrow in the federal funds market. Since many of the funds available in the federal funds market are provided by nonbank institutions, the current primary purpose of borrowing these funds is to earn the interest on reserves (IOR) available at the Fed. So, banks are making the diff erence in the two rates (fed funds and IOR) as a profit. The new assessment implicitly increases the cost of the federal funds by adding that assessment rate onto the fed funds rate. As a result, some banks have exited the market, reducing overall demand for the funds dramatically. The fall in demand has reduced the funds rate."