Start with the G-7 countries: that is, the United States, Japan, Germany, France, Italy, United Kingdom, and Canada. Now compare them with the largest 7 "emerging" economies: the E-7 would beChina, India, Brazil, Russia, Indonesia, Mexico and Turkey. A January 2011 report from pwc offers some projections comparing where these two groups are headed by 2050. 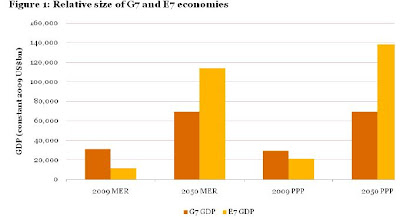 This change represents a remarkable shuffling of the economies of the world. To get a sense of the change, compare the rank order of the economies of the world in 2009 and 2050.  In 2009, the U.S. is the world's largest economy. By 2050, U.S. economy will be about 2.5 times as large--and is projected to be in third place in absolute size, behind China and  India.  What other countries move up the rankings notably by 2050? Brazil, Mexico, Indonesia, Turkey, Nigeria, and Vietnam. To my 20th century mindset, some of those countries just don't seem like global economic heavyweights. Time to start adjusting my mind to the coming realities. 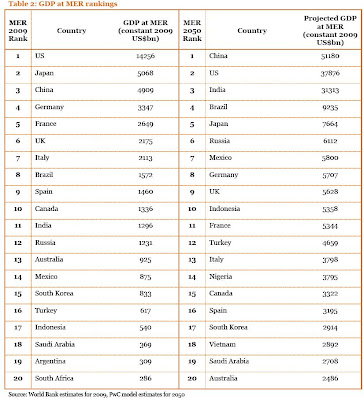 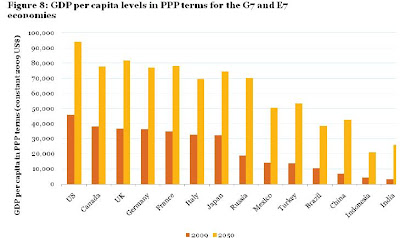 In an earlier post, I discussed China's Will China catch up to the U.S. economy?