Each summer for the last 20 years or so, I've spent a few days at the Stanford Summer Economics Institute for High School Teachers, giving some of the lectures and talking pedagogy with the participants. This year, one of my talks was on "The Economics of Immigration." Here are some of my favorite Powerpoint slides from the presentation (as always in a jpeg format so they are easy to copy for your own presentation, if you wish), along with a few thoughts.

Immigration--legal and illegal combined--is often measured by looking at the share of the U.S. population that is foreign-born, which is available through Census data. America's previous huge wave of immigration took the foreign-born share of the population up to around 14% for the later decades of the 19th century and the early 20th century. As the figure shows, the wave of immigration in recent decades hasn't topped that level yet, but is near 12% of population. It's worth remembering that America has long fluctuated between two views of immigration: one view represented by "give me your tired, your poor" written beside the Statue of Liberty, and the other represented by fierce restrictions on immigration, like effective ban on immigration from China starting in the 1880s, or the strict and limited quotas on immigration imposed in the 1920s. Both welcoming and opposing immigration are as American as apple pie. 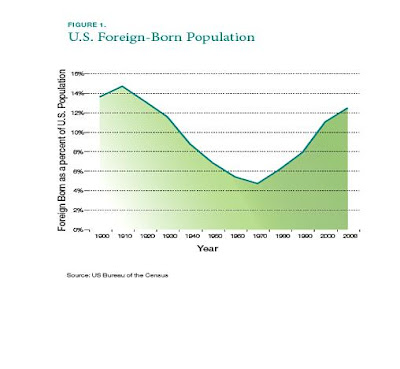 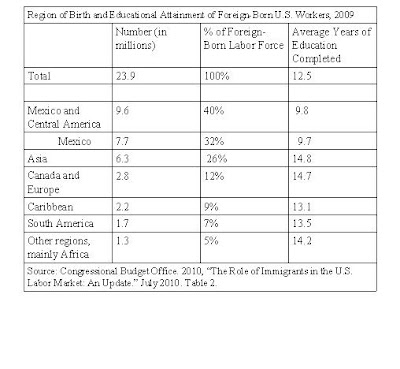 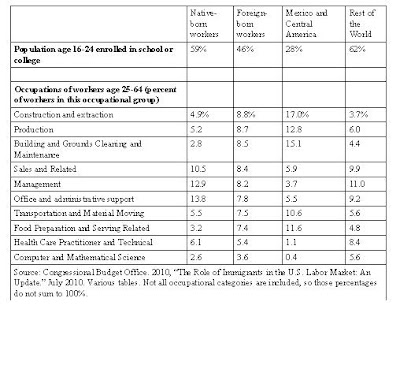 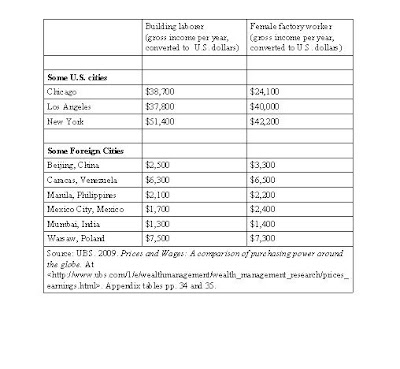 The question of how much immigration affects wages of U.S. workers is highly controversial. The answer often seems to depend on whether one analyzes data from a cross-section of cities, which tends to find that more immigration helps wages of native-born workers of all skills, or if one analyzes a time series of immigration patterns over time, which often finds that immigration hurts the wages of low-skilled native-born workers. Another factor underlying these different answers are analysis of whether low-skill immigrant labor is a complement or a substitute for low-skill native-born labor. The figure contrasts findings from two studies with different approaches. It is intriguing that even the studies which find a negative effect of immigrants on the wages of some skill levels of native-born labor find an effect that is quite small--no more than a few percentage points. 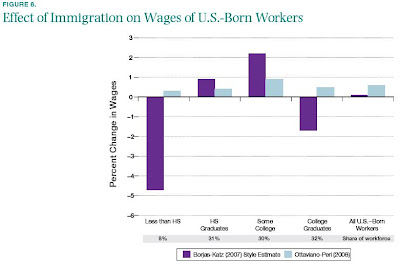 Spending on border patrol enforcement has risen substantially in the last decade or so. In the aftermath of 9/11,  greater policing of the border was politically inevitable. But in the last few years, improvements in the work prospects in Mexico combined with the slowness of the U.S. economy has meant that flows of illegal immigrants have dramatically slowed, or even stopped. Thus, the U.S. is spending more money on the border patrol at a time when the need for doing so has diminished. As the figure shows, the result is that the cost per border apprehension has been rising sharply. 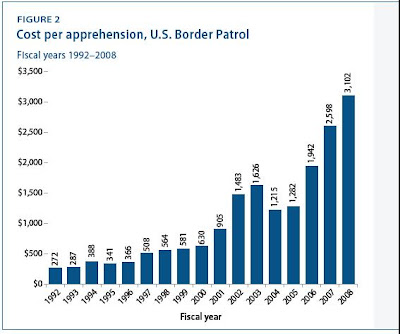 Moreover, it turns out that about half of those in the country without authorization arrived with a legal visa in hand, but then overstayed their visa. In a world of limited resources, there is a case to be made for stopping any increased spending on border enforcement and instead increasing the very limited spending on those who overstay their visas. There is also a case to be made for at long last ramping up the federal E-Verify program so that employers can more easily check whether potential hires are authorized to work in the U.S.

Finally, U.S. immigration policy is distinguished from most other countries both by the large numbers it admits, and also by its emphasis on handing out immigration slots based on family ties, rather than for work-related reasons. Here's a table from the Federal Reserve Bank of Dallas, based on OECD data, showing the difference. A group of experts convened in 2009 by the Brookings Institutions and the Kenen Institute for Ethics at Duke University estimated that if family preferences in immigration law were limited to spouses and children, and not extended to aunts, uncles, cousins, and the like, this change could free up 160,000 slots to be filled by skill-related immigrants. This change would roughly double the level of skill-related U.S. immigration. 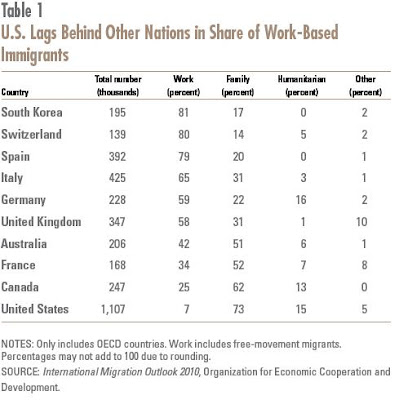 Note: In an earlier version of this post, there was a typo in the second paragraph, where I referred to "12% of GDP" instead of "12% of population." This version incorporates the correction. Thanks to sharp-eyed reader T.D. for calling this to my attention.