How the U.S. Has Come Back to the Pack in Higher Education


If one accepts the argument that the supply of skilled workers in the U.S. hasn't been keeping up with demand in recent decades, and further accepts the argument that a skilled workforce is essential to future growth in a nation's standard of living, it's troubling to observe that the America's long-standing advantage in sending more of its people on to higher education is evaporating. For example, in a report out last month from the Georgetown University Center on Education and the Workforce, Anthony P. Carnevale and Stephen J. Rose write: "A clear trend has emerged: The United States is losing ground in postsecondary education relative to our competitors. ... The significance of these rankings goes beyond mere bragging rights—increasing our supply of skilled labor is central to the vitality of the U.S. economy."

Carnevale and Rose illustrate the point with two figures. The first one shows the share of those in the age 25-64 age bracket who have college degrees (including both two-year and four-year degrees). The U.S. ranks near the top, with Japan and Canada. But if one looks at another figure, this time showing only those in the younger 25-34 age bracket, one sees that the U.S. advantage in college attainment is concentrated in older age groups. The U.S. is only middle-of-the-pack in attainment of college degrees among high-income countries. 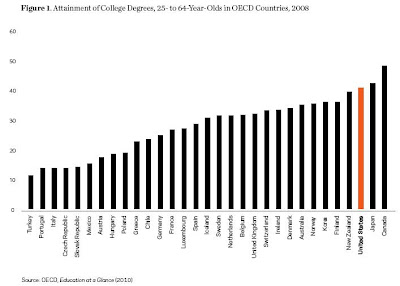 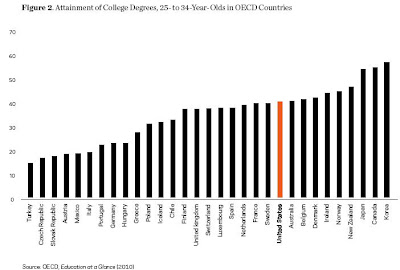 In the Summer 2008 issue of my own Journal of Economic Perspectives, Elizabeth Cascio, Damon Clark, and Nora Gordon make a similar point in "Education and the Age Profile of Literacy into Adulthood." They write: "For most of the twentieth century, the United States led the developed world in participation and completion of higher education. ... In recent years, however, other high-income countries—many of which established comprehensive secondary schooling in decades prior—have substantially expanded access to university education. In fact, many countries that significantly lagged the United States in university graduation only a decade ago—Finland, Sweden, and the United Kingdom among others— now have comparable
if not higher graduation rates."

They offer a table showing that in 1970, the U.S. led most countries of the world in (four-year) university graduation rates, and often by a lot. By 2004, lots of other high-income countries had closed the gap. 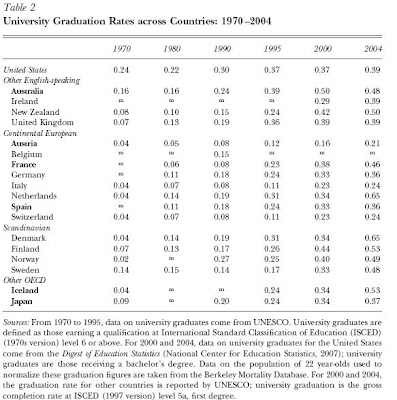 Carnevale and Rose point out that on current trends, the number of U.S. workers with a post-secondary education will rise by 8 million by 2025, and argue that the U.S. should set a goal of adding an additional 12 million workers with post-secondary education over that time. The goal seems worthy enough, but the devil is in the details. After all, the true challenge isn't to hand out an extra 12 million college diplomas, but to raise the education level of high school students so that more of them are ready to attend college, and to reform higher education to get costs under control and assure that it is adding to the skill sets of students, broadly understood.


There's a lot of cynicism these days about U.S. higher education, about whether the ever-rising costs are worth the benefits. I live and work in higher education, and there is plenty of room for reform. But whatever one's doubts about the current state of U.S. higher education, watching the U.S. lose its historical advantage over other high-income countries in terms of what share of the population gets a college degree is deeply troubling.