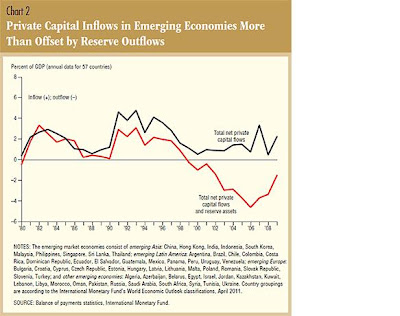 These "upstream" capital flows--that is, from middle-income to higher-income economies--won't go on forever. At some point, countries in the rest of the world will not wish to expand their holdings of foreign and especially U.S. dollar assets further.

But the pattern of the U.S. economy investing overseas in somewhat riskier private assets, while foreign governments and investors stock up on safe U.S. assets like Treasury bonds, may be a pattern that lasts for a long time. As I learned from an article by Richard Cooper on trade imbalances in the Summer 2008 issue of my own Journal of Economic Perspectives, even though foreign investors own more in U.S. assets than U.S. investors own in foreign assets, U.S. investors receive larger cash flows from their foreign assets than do foreign investors from their U.S. assets.

How is the U.S. economy getting higher payments from a lower total pile of assets? A more detailed look at those assets suggests and answer. More of the foreign assets are in low-earning safe havens like Treasury securities, while more of the U.S. assets abroad are direct ownership of assets or equity. For example, the U.S. has more direct investment abroad ($4 trillion) than the foreign-owned direct investment in the United States ($2.7 trillion). Similarly, U.S. investors owns more corporate stock abroad ($4 trillion) than foreign-ownership of corporate stocks in the U.S. ($2.4 trillion).(All statistics in these last two paragraphs are from tables B-103 and B-107 from the back of the 2011 Economic Report of the President.)

There is a long-term advantage here for the U.S. economy, based on its financial and legal structure, and its investment and managerial expertise. In a metaphorical sense, the U.S. economy operates like a huge bank, accepting "deposits" from the rest of the world on which it pays fixed safe interest rates, and then seeking ways to invest that money in corporate projects around the world.

That is, the U.S. economy can provide safe assets like Treasury bonds for the rest of the world economy. Governments of emerging markets often cannot borrow a great deal in their own currencies, and their economies have a hard time creating assets that global markets will regard as "safe." (Indeed, Ricardo Caballero of MIT argues that a cause of the financial crisis was the attempt of the U.S. financial sector to produce additional safe assets from mortgage-backed securities to satisfy the demand of foreign investors for such assets.) Meanwhile, managers and investors from the U.S. economy can also provide a certain kind of oversight of overseas companies in a way that in some cases is likely to work better than local oversight: that is, oversight from U.S. investors and managers can be more informed and less susceptible to local political pressures.