The Wall Street Journal published an editorial last Friday bemoaning high teenage summer unemployment, and blaming the recent rise in the minimum wage from $5.15/hour in 2007 to $7.25/hour in 2009. This summer, about 24% of teenagers will have jobs.

If I was in Congress, I would have leaned against voting to raising the minimum wage in 2007. I would rather help the working poor through further expansions of the earned income tax credit. I suspect that raising the minimum wage by 40% from 2007 to 2009 did have a negative effect on teen employment. But even speaking as non-fan of the higher minimum wage, I don't think it's the main cause of the low rates of teen employment.

Theresa L. Morisi at the Bureau of Labor Statistics published a useful overview of the long-run pattern of teen summer unemployment patterns about a year ago. Here are some themes I took away from her article:

1) Teen employment rates have been falling since the early 1990s. 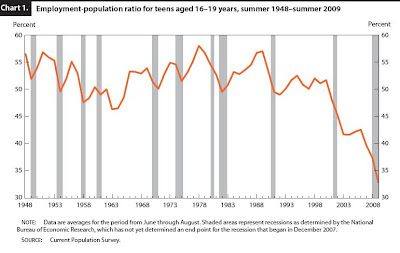 2) This decline in teen employment rates cuts across younger and older teenagers, ethnicity, and whether teens are enrolled in school or not. 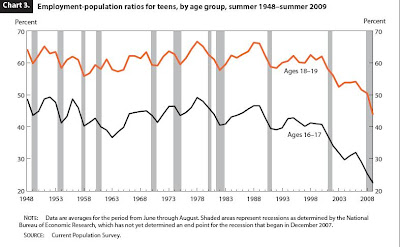 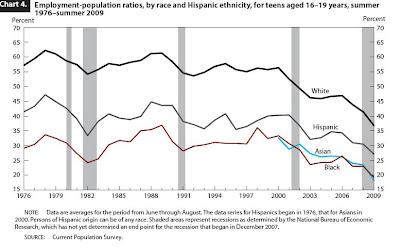 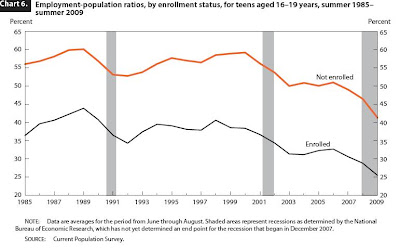 3) There are a number of plausible reasons why teenagers are working less. Families are more affluent. Summer school has increased. The high prices of college means, counterintuitively, that student earnings for college are less potentially important. One interesting pattern is that the share of teens not in the labor force who say they "want a job" has fallen since the 1990s. 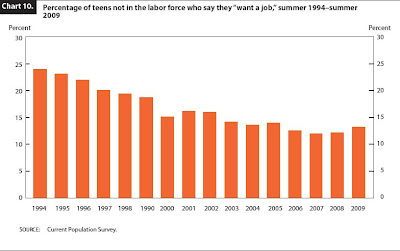 4) With these other social changes, wage rates for teenagers are probably not the main determinant. Remember that during much of this time, the value of the minimum wage after adjusting for inflation was falling. Measured in real 2007 dollars, the minimum wage was worth $6.50 in 1998 and $5.15 in 2007.But this didn't prevent teen employment from falling during this time. Here are teen wages over this time period. 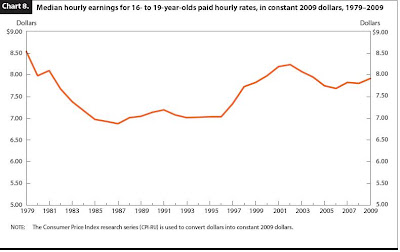