Lucas and Stokey on liquidity crises

Robert E. Lucas and Nancy L. Stokey have a lovely readable article in the June 2011 issue of The Region, published by the Federal Reserve Bank of Minneapolis, on "Liquidity Crises." The paper offers a readable overview that connects the main  themes of high-profile academic theory papers in this area to what actually  happened. A few highlights:


"Any one bank, no matter how large and respected, can go out of business almost without a ripple. Anyone living in an American city can list the downtown banks he grew up with that vanished in the merger movement of the 1990s. Who misses them? Indeed, who misses Lehman Brothers, for generations one of the most respected financial institutions in the world? Its valuable assets, both physical and human capital, were quickly absorbed by surviving banks without notable loss of services. It was the signal effect of the Lehman failure, whether a signal about the situations of private banks or about the Federal Reserve’s willingness to lend to troubled banks, that triggered the rush to liquidity and safety that followed."

"We will argue here that what happened in September 2008 was a kind of bank run. Creditors of Lehman Brothers and other investment banks lost confidence in the ability of these banks to redeem short-term loans. One aspect of this loss of confidence was a precipitous decline in lending in the market for repurchase agreements, the repo market. Massive lending by the Fed resolved the financial crisis by the end of the year, but not before reductions in business and household spending had led to the worst U.S. recession since the 1930s."

"As deposits moved out of commercial banks, investment banks and money market funds increasingly provided close substitutes for the services commercial banks provide. Like the banks they replaced, they accepted cash in return for promises to repay with interest, leaving the option of when and how much to withdraw up to the lender. The exact form of the contracts involved came in enormous variety. In order to support these activities, financial institutions created new securities and new arrangements for trading them, arrangements that enabled them collectively to clear ever larger trading volumes with smaller and smaller holdings of actual cash. In August of 2008, the entire banking system held about $50 billion in actual cash reserves while clearing trades of $2,996 trillion per day. Yet every one of these trades involved an uncontingent promise to pay someone hard cash whenever he asked for it. If ever a system was “runnable,” this was it. Where did the run occur?"

Lucas and Stokey answer that the run occurred in repo markets, and offer an intriguing table that shows while cash, private demand deposits, and money market funds all  had more money in January 2009 than they had in January 2008, repo contracts held by primary dealers dropped substantially. 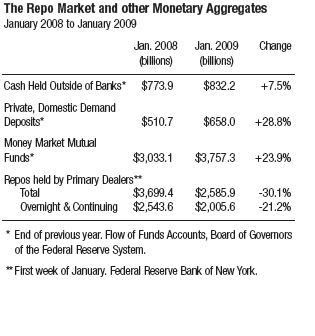