The IMF on the U.S. Economy #2: This Recovery in Historical Context

In a previous  post, I passed along some of the comments that the IMF had to make about U.S. fiscal policy and how and when to reduce budget deficits in the annual IMF report on the U.S. economy.  Here, I'll look at an intriguing comparison that the IMF offers between the aftermath of the Great Recession and the previous nine U.S. business cycles. In particular, there is a considerable disjunction in the current recovery between a lot of the output and employment statistics, which look quite bad, and the health of the business and financial sector, which looks quite good. 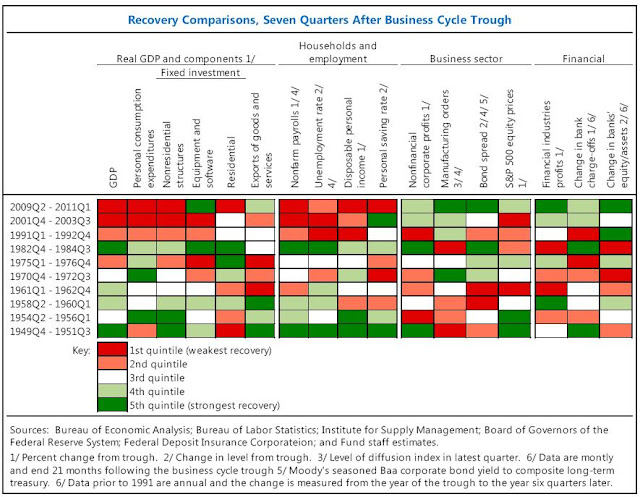 By far the most striking pattern in the table is that the current recovery has a lot of red shading on the left, but a lot of green shading on the right. That is, the current recovery looks pretty bad compared with its predecessors on GDP, consumption, personal income, jobs, and unemployment. But it looks pretty good compared with its predecessors on financial and nonfinancial corporate profits, manufacturing orders, stock prices, and the health of banks. How can these factors be reconciled?

Part of the answer lies in the good picture for U.S exports, which are helping to drive manufacturing orders, production of equipment and software, and nonfinancial corporate profits. Part of the answer must be that after several years of making sure that the financial sector has easy access to cheap credit, banks are much better off than a few years ago.

But the disjunction remains. Firms have profits, but haven't yet started hiring. Banks and other financial institutions have become  much healthier, but in many areas haven't significantly boosted their lending. It's as if many U.S. financial and nonfinancial companies are all holding their breath, waiting for some high-pitched dog whistle that only they can hear before hiring and lending picks up.