Economic Geyser: Must Be a Metaphor Here Somewhere!

A former student here at Macalester College, now graduated to friend status, went hiking with her family in Yellowstone National Park, and took a picture of the Economic Geyser. 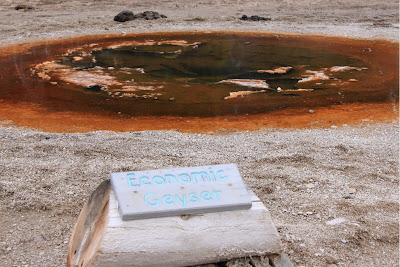 Apparently this geyser isn't too exciting. The U.S. Department of the Interior writes: "Economic Geyser is located in the Upper Geyser Basin between Grand and Giant geysers (near Beauty Pool). In the early days of the park, Economic Geyser was a "crowd pleaser"--erupting about every few minutes up to 25 feet high. These eruptions lasted into the 1920's, then the eruptions virtually ceased. Earthquakes in 1957 and 1959 caused short periods of eruption activity. Park volunteer observers reported additional eruptions in 1999."

Here's an old government photo of the geyser in its glory days. 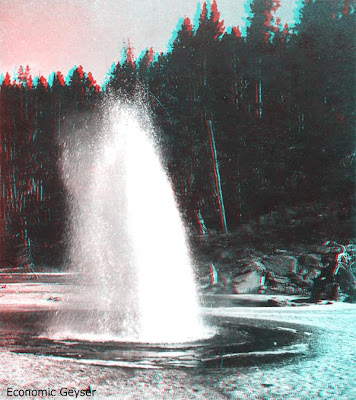 According to a 1917 book by Hiram Martin Chittenden--The Yellowstone National Park: Historical and Descriptive"--economic Geyser was named because: "No water lost in eruption. All falls back into crater."

All somewhat interesting, I guess, but it seems there must be a better metaphorical use for economics and geysers and Economic Geyser in particular.