The Council of Economic Advisers has a short summary of "U.S. Inbound Foreign Direct Investment." This seems to be defined in the report as "U.S. affiliates of foreign-domiciled corporations." I see a lot of commentary that mentions foreign ownership of U.S. portfolio assets, like U.S. Treasury bonds, but much less on FDI in the United States.

The CEA says: "The United States continues to receive the most foreign direct investment (FDI) of any country in the world. ... U.S. “majority-owned” affiliates of foreign corporations owned $11.7 trillion in U.S.
assets and had $3.5 trillion in annual sales in 2008, according to the most recently available data from the Bureau of Economic Analysis. Their value-added production within the United States was $670 billion in goods and services, which accounted for 5.9 percent of total U.S. private output. These firms employed 5.7 million U.S. workers, accounting for 5.0 percent of employment in the U.S. private workforce. ... The U.S. affiliates of multinational companies are typically high-productivity firms that are major private-sector contributors to national efforts to innovate and build."

Here's a bar graph putting the activities of U.S. affiliates of foreign corporations in the context of the U.S. economy. Here's a figure showing stocks of inbound FDI, where the U.S.  clearly leads the world by a lot. It also shows the Foreign Direct Investment Restrictiveness Index from the OECD. The U.S. isn't much above the OECD average on this restrictiveness index, but it's interesting to me that it is above the average at all. 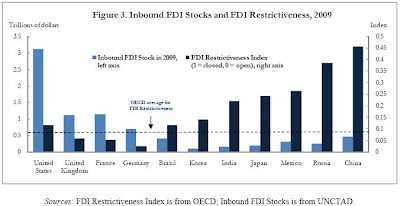