Mark Lino of the U.S. Department of Agriculture has authored this year's version of Expenditures on Children by Families, 2011, a report going back to 1960. This year's version uses data from the Consumer Expenditure Survey of 2005-06 on what people buy, and then the prices adjusted to their 2011 levels. My wife and I have three little bundles of joy--actually, they are rapidly metamorphosing into lanky adolescent bundles of joy--so this report always catches my eye. The headline finding, I suppose, is that average lifetime expenditures by a husband-wife family on a child were $234,900 in 2011.

Here is annual spending per child by household income level and by age of the child--more specifically, for the younger child in a family with two parent and two children. Spending per child for each age group is more twice as high in the higher as opposed to the lower income group. 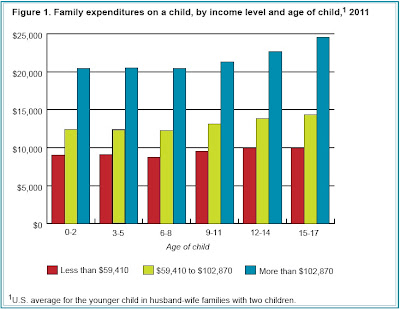 The primary expense is housing, but health care is also important. Over time, the actual cost of feeding and clothing children has become less important, while the out-of-pocket costs of child care and education have become more important. 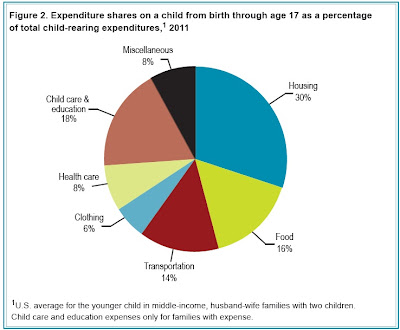 The costs of raising a child are rising over time, but the total size of the increase may be less important than the specific drivers behind the rise. Here's Lino on the cost differences from 1960 to 2011 in raising a child (references to figures omitted):


"In 1960, average expenditures on a child in a middle-income, husband-wife family amounted to $25,229, or $191,723 in 2011 dollars. By 2011, these estimated expenditures climbed 23 percent in real terms to $234,900 ... Housing was the largest expense on a child in both time periods and increased in real terms over this time. Food was also one of the largest expenses in both time periods, but decreased in real terms. Changes in agriculture over the past 50 years have resulted in family food budgets being a lower percentage of household income. Transportation expenses on a child increased slightly in real terms from 1960 to 2011."

"Clothing and miscellaneous expenses on a child decreased as a percentage of total child-rearing expenses and in real terms from 1960 to 2011. Reduced real expenses on children’s clothing is somewhat of a surprise given the popularity of many designer clothing items today; however, it is likely that technological changes and globalization have made clothing less expensive in real terms. ..."

"Health care expenses on a child doubled as a percentage of total child-rearing costs, as well as increasing in real terms, from 1960 to 2011. ...  Perhaps the most striking change in child-rearing expenses over time relates to child care and education expenses. It should be noted that in 1960, child care/education expenses included families with and without the expense. Even so, these expenses grew from 2 percent of total child-rearing expenditures in 1960 (for families with and without the expense) to 18 percent (for families with the expense) in 2011. Much of this growth is likely related to child care. In 1960, child care costs were negligible, mainly consisting of in-the-home babysitting. Since then, the labor force participation of women has greatly increased, leading to the need for more child care. Child-rearing expense estimates were not provided for single-parent families in 1960, likely because of the small percentage of children residing in such households at the time."


When I contemplate the costs of child-raising, I sometimes remember a bit of good cheer I once heard from a financial planner: Those who have children often feel much better about their standard of living in retirement. Those without children experience retirement as a time when their income has diminished, but their desired expenditures are the same or higher. But for those of us with children, retirement will be a time when our income has diminished but our expenditures--when we are no longer supporting children--will also be much lower. Just one more blessing of parenthood!