Certificates: An Alternative to College?

The number of people with job market certificates as their highest level of education has risen from 2% in 1984 to 12% by 2009. The number of certificates awarded has risen eight-fold in the last 30 years. What's going on here? Anthony P. Carnevale, Stephen J. Rose, Andrew R. Hanson tell the story and discuss the evidence in "Certificates: Gateway To Gainful Employment and College Degrees," a June 2012 report from the Georgetown University Center on Labor and the Workforce.

What fields do certificates cover?
Some of the most common areas for certification are health care, business and office management, computer and information services, auto mechanics, construction, metalworking, and electronics. As the table below shows, many of these certificate fields are dominated by either men or women. 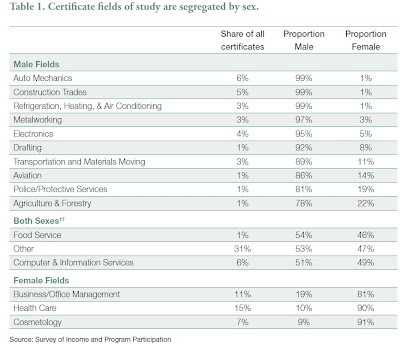 Certificate holders tend to come from lower-income households and lower education levels, and to get their certificate at a young age.

About 44% of certificate-holders earned their certificate before the age of 22; 66% earned it before age 29. But this does leave one-third who earned the certificate in their 30s and 40s and older, often as a way of brushing up their job market credentials.Certificate holders tend to come from households with lower income levels, although the gap isn't as large as I might have guessed. For example, for those from a three-person household with less than $34,000 in income, about 18% have a certificate; for those from households with more than $102,000 in income, 10% have a certificate. About 34% of certificate-holders have a college degree. 40% have only a high school degree--or didn't finish a high school degree.

Tennesssee is a leading example of a state with a focus on certificate programs.

"TTC is known for its high completion rates and high placement rates in high skill, high wage jobs. Over 70 percent of students complete their program of study, compared to just 13 percent at the state’s community colleges. Graduates are placed in field at an 83 percent rate and 95 percent of students pass certification exams on the first attempt."

"What stands out about TTC are its unique program structure, learning model, and support services. Students have one or two instructors over the course of their program and have an average of six hours of face time per day with those instructors. Students’ advancement through the program is based on mastery of skills rather than completion of individual course requirements. Students’ choices are significantly constrained; their only decisions are their program of study, whether they attend on a full- or part-time basis, and whether they attend during the day or evening."

"Remedial coursework, which often bogs down community college students, is replaced by a Technology Foundations course that all students are required to take. Students’ learning is largely self-paced. TTC buildings are designed with a focus on hands-on learning, with few traditional classrooms and more “lab” space. Employers of TTC graduates report that the quality of their work is similar to others with two to three years of work experience. In addition, TTC’s faculty, staff, and administration are all part of the support services offered to students. TTC reports the support system is critical to the success of students from low-income communities."

Certificates seem to boost earnings for those with lower skill levels, but there are complexities.

The report notes: "The median worker with a high school diploma earns slightly more than $29,000, while certificate holders earn slightly less than $35,000, meaning that the certificate premium over high school is 20 percent." This comparison includes only those for whom a certificate is their highest degree.

One difficulty with all such comparisons of course, is that those who get certificates may have more persistence or drive than those with similar education who don't. It may not be the certificate per se that helps them earn more money, but rather their extra persistence and drive. On the other side, the reports from Tennessee that those with certificates are similar to those with 2-3 years work experience suggests that the certificates are offering a real boost in skill levels, and thus helping some workers open a door to the labor market that they might not otherwise be able to achieve.

Another difficulty is that the amount by which a certificate improves earnings varies with many factors.  Certificates in health care, cosmetology, and food service often don't seem to increase pay by much. Other certificates like "police and protective services, computer and information services, agriculture, and business and office management offer large earnings premiums." Certificates have a bigger effect in some states than in others--perhaps reflecting differences in what is needed to get a certificate in different states, or in the average pay levels in different states.

Certificates may have a role to play in helping the transition from school to jobs, especially for those with lower skill levels.

One theme that I seem to touch on every few months is that it is highly unlikely that the U.S. is going to dramatically expand the number of people attending college--at least college in its current form, which is quite costly. We need to be thinking about other ways to smooth the transition from high school to work for those who, whether by skills or interests or inclinations, aren't going to flourish in a college setting. Certificates can play a role here. Here's some of the conclusion from Carnevale, Rose, and Hanson"

"In an American economy where the advancement of technology and globalization means that a
high school diploma alone is no longer able to provide family-sustaining earnings to many, certificates represent one piece of a multi-pronged solution on the road to a workforce with 60 percent postsecondary attainment. Though certificates currently aren’t counted in many measures
of postsecondary attainment, often they provide the outcomes that degree-seeking students
are looking for: gainful employment. Certificates can also serve as the first rung on the ladder
to a college degree or as training for workers with degrees who are engaged in the process of
lifelong learning and career advancement. The rapid growth of certificates over the past 30 years
is a promising signal that students and institutions are recognizing the value of certificates at an
increasing rate. The main lesson from the available data on certificates is this: They are diverse. While it is important to look at the value of certificates in the aggregate, their diversity in purpose and value means that transparency is absolutely essential. By and large, certificates work, but they do
not work for everyone."


I posted on January 16, 2012, about "Certificate Programs for Labor Market Skills." For some other alternatives to the standard college degree, I posted last October 18 on "Apprenticeships for the U.S. Economy" and last November 3 on "Recognizing Non-formal and Informal Learning."
Posted by Timothy Taylor at 6:00 AM