The Death Penalty and Deterrence: Why No Clear Answers?

A panel of the National Research Council headed by Daniel S. Nagin and John V. Pepper has published "Deterrence and the Death Penalty." The report can be ordered or a free PDF can be downloaded here. The report refers back to a 1978 NRC report which concluded that "available studies provide no useful evidence on the deterrent effect of capital punishment." The latest study reaches the same conclusion.

Why has the research found it so hard to sort out cause and effect in this situation? The NRC report emphasizes two reasons, but discusses a number of others:

1) One problem is that deciding on the effect of capital punishment requires saying, "Compared to what?" But existing studies don't pay enough attention to what the alternative punishment might have been. Here the NRC report: "Properly understood, the relevant question about the deterrent effect of
capital punishment is the differential or marginal deterrent effect of execution over the deterrent effect of other available or commonly used penalties, specifically, a lengthy prison sentence or one of life without the possibility of parole. One major deficiency in all the existing studies is that none specify the noncapital sanction components of the sanction regime for the punishment of homicide."

2) Another problem is that studies of the deterrent effect of capital punishment need to make some assumptions about how potential murderers perceive that penalty. Are they aware of how often it is imposed, and under what circumstance, and their actual chances of receiving the penalty? In many studies, these underlying assumptions are not spelled out clearly, or even at all. 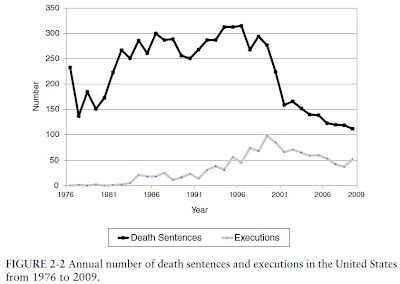 Next, here's a graph of homicide rates since 1974. Notice that it starts off at about 10 per 100,000 population, and then starting around 1990 drops off to about half that level. In other words, about a decade after capital punishment sentences rise, and at about the same time as the execution rate starts to rise, the homicide rate drops off. A naive statistical comparison between these patterns using national data might well suggest that higher levels of executions preceded a drop-off in murders. 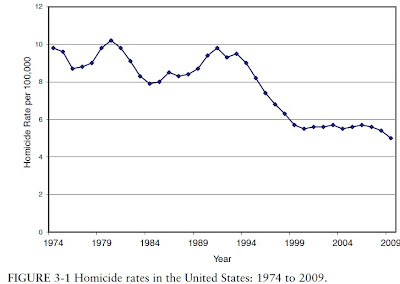 But of course the deal penalty is not equally likely across states. New York state sentenced only 10 people to death from 1973-2009, and executed none during that time. California and Texas both sentences large numbers of people to death, but California actually carried out only 13 people from 1976-2009, while Texas executed 447 people. However, these differences in death sentences and actual executions seem to have very little effect on the murder rate in these three states, which essentially follows the national pattern in all three cases. 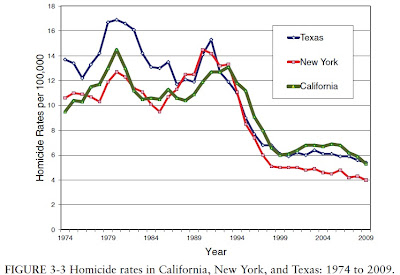 Of course, researchers in this area are fully aware of these difficulties in looking at the data over time and across states, and have applied a wide array of methods to this data. Given these issues, it is perhaps no surprise that the NRC report lists studies in the last decade which find that each execution deters five other murders, or 18 other murders, as well as studies that find that capital punishment deters no murders at all, and studies that find that the conclusions one draws from the data are quite fragile, depending on small differences in the statistical tests that are run.


Of course, the issue of whether capital punishment deters is not the only issue in making policy choices about capital punishment. The NRC report is careful to point out that it is not considering the moral arguments for or against capital punishment, nor is it looking at the arguments over whether the penalty is administered in a consistent or nondiscriminatory fashion. Personally, my own moral sense would not rule out the concept of the death penalty for the most extreme and egregious cases of murder. I do worry that its application seems to vary so greatly across jurisdictions, and across racial groups, and by the quality of the lawyers involved in the case. I also worry that in a world without capital punishment, those who have already committed crimes that could land them in prison for life (say, kidnapping) have an incentive to kill potential witnesses, because in a situation without capital punishment, there is no additional penalty for doing so.

The NRC report is careful to point out several times that a lack of solid empirical support for whether capital punishment deters doesn't prove that such an deterrent effect does not in fact exist. As the old saying among empirical researchers goes: "Absence of evidence is not evidence of absence."


On the particular issue of the uncertainty of whether or how much capital punishment deters future murders, I struggle with a conundrum that was put to me many years ago. Take as a starting point that we aren't sure whether capital punishment deters or not, and we must make a choice whether to execute certain murderers or not. Then consider four possibilities: 1) we execute some murderers and it does deter others, so we save innocent lives; 2) we execute some murderers and it doesn't deter others; 3) we don't execute any murderers and it wouldn't have deterred anyone if we did; and 4) we don't execute any murderers but it would have deterred some future murderers if we had done so. Those who worry about executing those who don't really deserve such a grave punishment, or even who may be innocent, have a point. But if it's possible that capital punishment may deter, and we genuinely aren't sure, then we also need to take into account in our policy calculations the possibility that executing the most egregious murderers might save innocent lives.