UNICEF Innocenti Research Centre has issued its report: "Measuring child poverty: New league tables of child poverty in the world’s rich countries.  The United States doesn't stack up very well, although it's important to be clear on just what the comparisons are showing.

For comparability across countries with different income levels, the report uses a working definition of "poverty" as half of the median income in that country. This graph shows the share of children in each country who are growing up in families where the income is less than half the median income for that country. The U.S., with 23.1% of its children in such families, ranks 34th out of 35 countries. 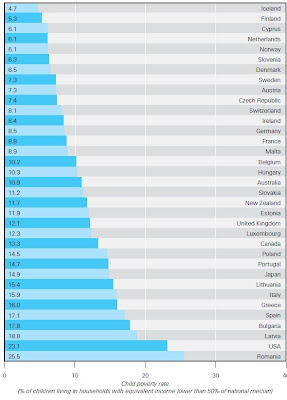 It's important to be clear on what this graph doesn't show. It doesn't show that U.S. children are more deprived in absolute terms than children in other countries. The U.S. has a higher level if incomes than these other countries--much higher than some of them. Indeed, the UNICEF report notes that half of the median income for the 10 richest countries in this table is more than the actual median income for the 10 poorest countries in the table.

In addition, income is more unequally distributed in the U.S. than in many of these other countries. As a result, the U.S. will have a larger share of its population living in households that earn less than 50% of the median income compared with countries that have a much more equal distribution of income like Iceland or Finland.  The UNICEF report offers an extended discussion of poverty lines set in absolute terms and those set in relative terms, and the report offers data and examples for both approaches. The argument that it can be useful to look at a relative poverty line, like 50% of median income in a country, goes like this:

"In sum, a relative poverty line drawn at 50% of median income is an attempt to define a concept of poverty on which there is widespread agreement in principle – a concept which says that the poor are those who do not have access to the possessions, amenities, activities and opportunities that are considered normal by most people in the society in which they live ... 50% of the median is a plausible measure of what it is intended to measure – the sense of falling so far behind the norms of one’s society as to be at risk of social exclusion. ...

The politics of designing government policies that affect children is complex, because only adults can vote. In many countries, including the United States, children are a decreasing share of the population. For example, U.S. Census data from 2010 showed that those under 18 years of age were 24% of the U.S. population--an all-time low. The U.S. Census Bureau (Table AVG1) estimates that America had 118 million households in 2011, which it divides into 78 million "family" households with an average of 3.25 people each and 40 million "nonfamily" households with 1.25 people each. Of the subset of "family" households, only about 46% have children--also an all-time low. No politician attuned to re-election ever says anything negative about "the children," but as the proportion of children in the population and the share of households with children drops, it becomes politically harder to focus spending and tax policy on the concerns of families with children.

Of course, it is always delicate to design government policy in support of children, because a sensible policymaker needs to be concerned about the incentives created when resources typically flow through their parents. But along with thinking about how U.S. tax and spending policy might support families with children in direct ways, it's also useful to think about how schools, libraries, community organizations, and public areas like parks and sidewalks can be supportive to the children.


I ran across the UNICEF report at Miles Corak's blog here.  In a post called "The sad, sad story of the UNICEF Child Poverty Report and its critics,"  Corak offers some pointed commentary on how such reports have been received in the past.