Wealth by Distribution, Region, and Age

The Federal Reserve has published results from the most recent Survey of Consumer Finance, the triennial survey that is the canonical source for looking at the wealth of households. The results are in an article in the June 2012 issue of the Federal Reserve Bulletin called "Changes in U.S. Family Finances from 2007 to 2010: Evidence from the Survey of Consumer Finances," by a team of authors led by Jesse Bricker, Arthur B. Kennickell, Kevin B.Moore, and John Sabelhaus.

The headline finding from the report is that the median household wealth level fell from $126,000 in 2007 to $77,000 in 2010. Mean wealth is of course far higher than median wealth. It fell from 584,000 in 2007 to $499,000 in 2007. During a three-year period when housing prices and the stock market declined, a fall in wealth is expected. I'm still trying to digest the data, but here, I'll focus on three patterns in the evolution of wealth that just happened to catch my eye: changes across the distribution of wealth, across regions, and across age groups. Here's a table with the mean and median household values for the 2001, 2004, 2007, and 2010 surveys. 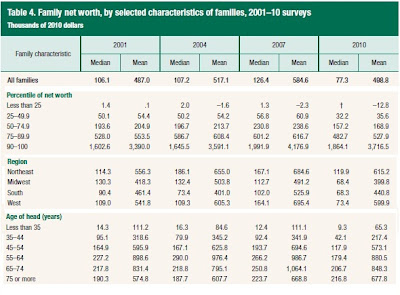 Changes in the Distribution of Wealth

"Median net worth fell for all percentile groups of the distribution of net worth, with the largest decreases in proportional terms being for the groups below the 75th percentile of the net worth distribution. From 2007 to 2010, the median for the lowest quartile of net worth fell from $1,300 to zero—a 100 percent decline; at the same time, the mean for the group fell from negative $2,300 to negative $12,800. For the second and third quartiles, the median and mean declines in net worth were smaller but still sizable; for example, median net worth for the second quartile fell 43.3 percent. Median and mean net worth did not fall quite as much for the higher net worth groups. For the 75th-to-90th percentile group, the median fell 19.7 percent while the mean fell 14.4 percent. For the wealthiest decile, the 11.0 percent decline in the mean exceeded the 6.4 percent decline in the median for that group; as was discussed earlier in the case of family income, this pattern of the changes in
the median and mean suggests that there was some compression of higher values in the wealth distribution."

Changes in Wealth by Region

The drop in housing prices hit especially hard in the western states, and the decline in median wealth was by far the highest in that region. Here's the Fed report:

"Between 2007 and 2010, median net worth fell dramatically for families living in all regions of the country, but especially for those living in the West—a 55.3 percent decline. This pattern reflects the effect of the collapse of housing values in several parts of the West region. Median wealth in every other region fell 28.2 percent or more. As with the overall population and most other demographic groups discussed earlier, the decline in mean net worth within every region was smaller than the drop in the median. In the South and Midwest regions, the percentage decline in the median was about twice as large as the percentage decline in the mean, but in percentage terms, the median for the West fell four times as much as the mean."

Changes in Wealth by Age

The age 35-44 group experienced the biggest falls in net worth. Oddly enough, the over-75 age group saw a modest rise in net worth from 2007 to 2010. This must mean that the over-75s were not as heavily exposed to the drop in housing prices and and the stock market. Here's the Fed: