The Federal Trade Commission has released the Hart-Scott-Rodino Annual Report 2011.  Each year, it summarizes the number of  mergers and acquisitions, their size, and some trends in antitrust enforcement. At least in my reading, the data in the report hints that a new wave of mergers may be on the way.

The Hart-Scott-Rodino legislation requires that when businesses plan a merger or an acquisition above a certain price--typically $66 million in 2011--it must first be reported to the Federal Trade Commission. The FTC can let the merger proceed, or request more information. Based on that additional information, the FTC can then let the merger proceed, block it, or approve it subject to various conditions (for example, requiring that the merged entity divest itself of certain parts of the business to preserve competition in those areas).

Here are the total mergers reported for the last 10 years. You can see the wave of mergers and acquisitions that peaked in 2007--and what appears as if it could be the start of a new merger wave in the last couple of years. 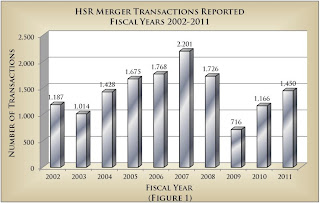 The total value of merger transactions reported under Hart-Scott-Rodino isn't completely comparable across years, because the threshold at which transactions need to be reported has risen over time. But for what it's worth, here's the pattern of the total dollar value of reported transactions since the late 1990s.


And here's a table showing the size distribution of the reported mergers in 2011. About 28% of the transactions exceeded $500 million; 11% exceeded $1 trillion in size. 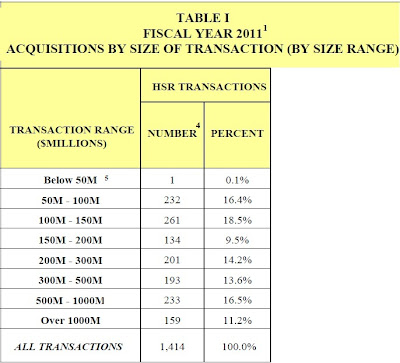 The FTC allows most mergers to proceed, which makes sense in a competitive market economy. As a general rule, those who run businesses are in a better position than government economists to plan strategies for their firms. In 2011, about 4.1% of the mergers reported to the FTC has a request for additional information. At the end of the day, the FTC actually challenged 20 mergers in 2011. Thirteen of these challenges went to court; 11 were settled by consent decree. Perhaps the best-known of these cases in 2011 was the FTC decision to block AT&T’s proposed acquisition of T-Mobile. With the other seven, two of the deals were abandoned, and the other five led to restructuring of the deal or changes in conduct. 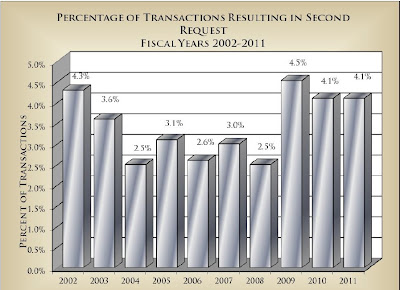 There are a number of reasons to suspect that a new wave of mergers may be coming, nicely reviewed in an article in the Economist magazine of May 19 called "Surf’s up: Merger waves mean that markets can consolidate rapidly. The next one is coming."' Mergers often happen when there are lots of struggling firms and excess capacity, which creates lots of willing sellers and good deals for possible buyers. When firms have a lot of cash on their balance sheets, like now, mergers start to look attractive. When interest rates are low, borrowing money to finance a merger or acquisition looks more attractive, and the alternative possible investments for corporate funds look less attractive.

Waves of mergers often happen in waves. Once a few mergers happen in an industry, other companies start to feel as if they need to find a merger partner as well. In short, the broad economic conditions are ripe for a wave of mergers and the data for 2011 suggests that such a wave may just be getting underway. The FTC and the antitrust division over at the U.S. Department of Justice should be on their toes.