One of the hot new trends in economics over the last decade or two is carrying out randomized controlled trials, and one of the most talked-about examples of this approach is now officially published. The study looks at whether providing teachers in low-income countries with a digital camera and then requiring them to take a time-stamped picture at the beginning and end of the school day--and then linking this to financial incentives--can reduce teacher absenteeism. The study is called "Incentives Work: Getting Teachers to Come to School," by Esther Duflo, Rema Hanna, and Stephen P. Ryan, and it appears in the June issue of the American Economic Review. The article isn't freely available on-line, but many academics will have access through their libraries.

Teacher absenteeism at rates of 20 and 30% and more have long been recognized as a severe problem in many low- and middle-income countries. For example, in a Winter 2006 article in my own Journal of Economic Perspectives, Nazmul Chaudhury, Jeffrey Hammer, Michael Kremer, Karthik Muralidharan and F. Halsey Rogers wrote "Missing in Action: Teacher and Health Worker Absence in Developing Countries."

Here's the Duflo, Hanna, and Ryan description of this randomized controlled trial run under the auspices of a nongovernment organization called Seva Mandir in India (footnotes and citations omitted):


"Seva Mandir runs about 150 NFEs [nonformal education centers] in the tribal villages of Udaipur, Rajasthan. Udaipur is a sparsely populated, hard-to-access region. Thus, it is difficult to regularly monitor the NFEs, and absenteeism is high. A 1995 study found that the absence rate was 40 percent, while our first observation in the schools included in our study (in August 2003, before the program was announced) found that the rate was about 35 percent.  Before 2003, Seva Mandir relied on occasional visits to the schools, as well as reports by the local village workers, to monitor teacher attendence. They then use  bimonthly teacher meetings to talk to delinquent teachers. Given the high absence rate, they were aware that the level of supervision was insufficient.

"Therefore, starting in September 2003, Seva Mandir implemented an external monitoring and incentive program on an experimental basis. They chose 120 schools to participate, with 60 randomly selected schools serving as the treatment group and the remaining 60 as the comparison group. In the treatment schools, Seva Mandir gave each teacher a camera, along with instructions for one of the students to take a photograph of the teacher and the other students at the start and end of each school day. The cameras had a tamper-proof date and time function that made it possible to precisely track each school’s openings and closings. Rolls were collected every two months at regularly scheduled teacher meetings, and payments were distributed every two months. If a camera malfunctioned, teachers were instructed to call the program hotline within 48 hours. Someone was then dispatched to replace the camera, and teachers were credited for the missing day.

At the start of the program, Seva Mandir’s monthly base salary for teachers was Rs. 1,000 ($23 at the real exchange rate, or about $160 at purchasing power parity) for at least 20 days of work per month. In the treatment schools, teachers received a Rs. 50 bonus ($1.15) for each additional day they attended in excess of the 20 days (where holidays and training days, or about 3 days per month on average, are automatically credited as working days), and they received a Rs. 50 fine for each day of the 20 days they skipped work. Seva Mandir defined a “valid” day as one in which the opening and closing photographs were separated by at least five hours and at least eight children were present in both photos. Due to ethical and political concerns, Seva Mandir capped the fine at Rs. 500. Thus, salaries ranged from Rs. 500 to Rs. 1,300 (or $11.50 to $29.50)."

What was the result?

"The program resulted in an immediate and long-lasting improvement in teacher attendance rates in treatment schools, as measured through monthly unannounced visits in both treatment and comparison schools. Over the 30 months in which attendance was tracked, teachers at program schools had an absence rate of 21 percent, compared to 44 percent at baseline and the 42 percent in the comparison schools." 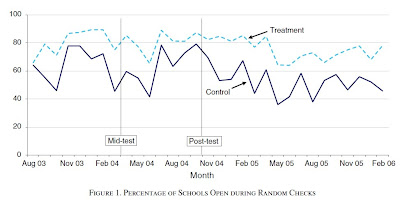 Of course, the Duflo, Hanna and Ryan analysis goes much deeper than this graph. The research paper is technical, and it slices and dices the data with care and expertise to consider alternative explanations, alternative payment schedules, and more. But one basic message is that the combination of monitoring with the digital cameras and providing financial incentives did seem to improve attendance. Another message is that when teachers were in school more, students had more days of schooling, and their test results showed significant gains in learning. "Two and a half years into the program, children from the treatment schools were also 10 percentage points (or 62 percent) more likely to transfer to formal primary schools, which requires passing a competency test."

Even teachers seemed pleased by the program, although they of course griped about some of the rule that the photos be taken five hours apart on a given day.

"Overall, teachers did not complain about the principle of the program, although many teachers had some specific complaints about the inflexibility of the rules. For example, many did not like the fact that a day was not valid even if a teacher was present 4 hours and 55 minutes (the normal school day is 6 hours, but slack of 1 hour was given). On the other hand, many felt empowered as the onus of performing better was actually in their hands: “Our payments have increased, so my interest in running the center has gone up.” Others described how the payment system had made other community members less likely to burden them with other responsibilities once they knew that a teacher would be penalized if he did not attend school. This suggests that the program may actually have stronger effects in the long run, as it signals a change in the norms of what teachers are expected to do."

This study and this topic are heartbreaking in so many ways. The extremely high levels of teacher absenteeism are grim. The notion that a "successful" program for reducing teacher absenteeism gets the rate down from two out of every five days to one out of ever five days is grim. The thought of impoverished children faithfully showing up each day in the face of this absenteeism (students attendance doesn't seem higher when teachers show up more often) is grim. Just to help keep the students in mind, here's one of the actual photos from the project, taken from an article by Duflo and Abhijit Banerjit in the Winter 2006 issue of my own Journal of Economic Perspectives called "Addressing Absence." 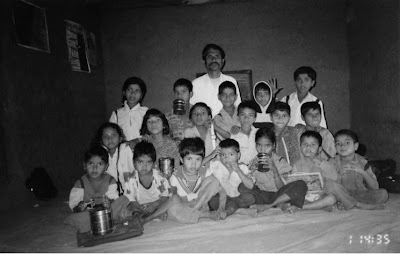 Perhaps most grim of all is that the entire Seva Mandir study was carried out in "nonformal education centers," rather than schools, and using "para-teachers," rather than regular teachers. The reason is that in India, as in many other low- and middle-income countries, teachers are a highly organized labor group that politicians don't dare to cross, and so proposals to increase the dismally low levels of teacher attendance don't even happen in the regular school sector. But there is something optimistic about the use of inexpensive digital technology as a way of addressing the problem--and perhaps even of eventually altering the social norms about what kind of teacher attendance should be expected.