The Congressional Budget Office has published "The 2012 Long-Term Budget Outlook." It's a go-to source for balanced and unheated analysis on this subject. The main focus is not on the annual budget deficits of the last few years or the next few years, but rather on the overall accumulation of federal debt. Here are some points that caught my eye.

Current Federal Debt in Long-Run Perspective
Here's a figure showing the ratio of federal debt/GDP from 1790 to the present. Notice that before World War II, the highest points of federal borrowing--the Revolutionary War, the Civil War,  World War I, and the Great Depression--were all below a debt/GDP ratio of 50%. World War II pushed the debt/GDP ratio above 110%, but then it dropped back down after a few decades. Even after the big budget deficits of the 1980s and early 1990s, the debt/GDP ratio didn't get above 50%. But the current debt/GDP ratio is now above 70%, higher than any previous episode in U.S. history other than World War II. The federal debt isn't in completely uncharted territory, but it hasn't visited this neighborhood often before.

Alternative Scenarios for Long-Run Debt
The CBO does two main projections for long-run federal debt. One projection assumes that current law will be followed exactly. Under this scenario, which the CBO calls the "Extended Baseline Scenario," the debt/GDP ratio soon flattens out and fades. But frankly, this current law scenario can't be trusted. After all, nothing stops Congress from passing and the President from signing a law that says all federal budgets will be balanced after, say, 2020. On paper, this solves the debt problem! But in practice, if the law is virtually certain to be changed before 2020, it solves nothing.

Thus, the CBO also offers the "Extended Alternative Fiscal Scenario," which "incorporates the assumptions that certain policies that have been in place for a number of years will be continued
and that some provisions of law that might be difficult to sustain for a long period will be modified, thus maintaining what some analysts might consider “current policies,” as opposed to current laws."

For example, tax cuts enacted by a Republican Congress and signed into law by President Bush in 2001 were scheduled to expire in 2010. But in 2010, a Democratic Congress and President Obama extended those tax cuts through 2012. The CBO "alternative" scenario assumes that this lower level of taxes will continue after 2012. It also assumes that Congress will continue to pass "temporary" relief from the Alternative Minimum Tax. It assumes that Congress will prevent the large cuts in Medicare now written into current law: a 31% cut in physician payments scheduled for next year, and automatic reductions of 1% per year in other reimbursements over the long term.  The alternative fiscal scenario also assumes that federal spending for activities other than health care and Social Security will remain more or less at their average levels for the last two decades (as a share of GDP), rather than dramatically falling in size over the next decade or two as current law somewhat mysteriously requires. The alternative scenario concludes that when push comes to shove, Congress and the President won't let the automatic spending cuts mandated by the Budget Control Act a few years ago take effect.

Health Care Spending Drives the Long-Run Debt Forecast
Social Security spending is slated to rise as the post WWII baby boomers hit retirement age, rising from 5% now to about 6% of GDP in 2037. However, spending on federal health care programs under current law (that is, assuming the unrealistic cuts in Medicare) would still rise from 5^% of GDP today to 10% of GDP by 2037. The sustained rise in federal spending in the alternative scenario is first due to health care spending and to not assuming that all other federal spending is slashed as current law projects--and then later due to monumental interest costs that build up from the earlier borrowing.

The upper left bar graph compares the average level of Social Security and federal health spending for the average of 1972-2011, and then looks at what it would be 25 years from now in 2037 under the baseline and the alternative scenario. Notice that under the baseline scenario the increase is large, and under the alternative scenario it's even larger. Under both scenarios, all other federal spending (except interest payments) decreases. Total revenues are higher in the baseline scenario, which assumes that the Bush/Obama tax cuts will be eliminated and the reach of the Alternative Minimum tax will greatly expand. 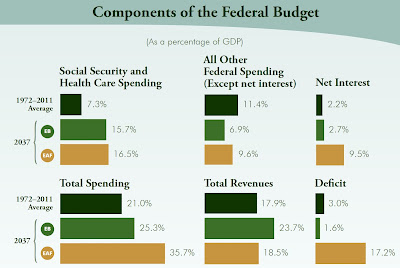 Why acting sooner is better than later.
The CBO is careful to take no stand on exactly how soon federal deficits should start coming down.  The report does make the point that sooner is better than later for long-term economic growth. But it also points out that postponing a solution tends to be better for anyone born more than 21 years ago---that is, for most voters!--because it pushes more of the costs of addressing the federal debt on to those who are under 21 or not yet born.

"CBO’s analysis suggested that, depending on the policy used to stabilize the debt, delaying action for 10 years—which would allow the debt-to-GDP ratio to rise by an additional 40 percentage points under the assumptions used for that analysis—would cause real output to be lower by between 2½ percent and 7 percent in the long run than it would have been if the ratio had been stabilized earlier at a lower level. ... Most of the decline in output caused by delaying action would stem from two factors: the crowding out of investment in productive capital, which would reduce the size of the capital stock by between 7 percent and 18 percent; and the effects of higher marginal tax rates (which would ultimately be required under the policy that stabilizes debt by raising taxes) on people’s incentives to work and save.

There is legitimate room for disagreement over how quickly and how severely to try to reduce federal budget deficits, given the continued sluggishness of the economy. But a growing body of research (for example, see here and here) suggests that the ratio of public debt/GDP can reach about 90% of GDP without much negative effect, and then the chances of reduced growth or even a financial crisis become much more severe. Over the next 10 years, or maybe sooner, current federal budget policies are putting the debt/GDP ratio on a collision course with a very hard reality.