I found myself checking some facts about the relative size of U.S. government revenues, expenditures, and debt in the OECD publication "Government at a Glance 2011." Just to be clear, this data sums up all levels of government together, so for the United States, it includes federal, state, and local government. 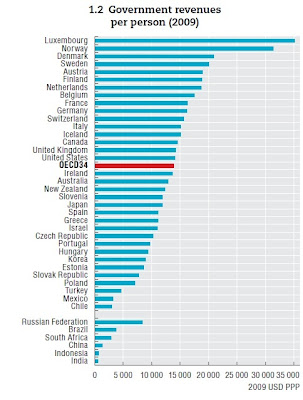 When it comes to spending as a share of GDP, the U.S. government at all levels ranks below the average for the OECD comparison group, but in spending, the U.S. isn't as much of an outlier as it is in expenditures. For example, expenditures as a share of GDP in the U.S. are quite similar to Canada, and above Japan and Australia. Again, because the U.S. economy is richer on a per capita basis, U.S. government expenditures on a per person basis are higher than the average for the group: for example, higher than expenditures per person in France, Germany, Italy and the United Kingdom. 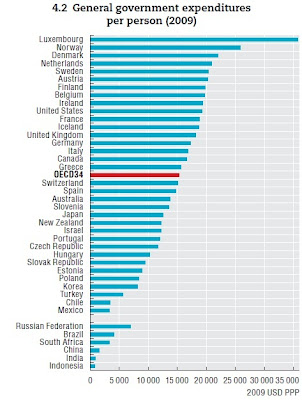 The calculation here is "gross" government debt, not "net." The difference is that many governments owe some debt to themselves; in the U.S., for example, the $2.7 trillion or so in the Social Security Trust Fund is invested in Treasury bonds, which means that one part of the government owes the money to another part of the government. In a U.S. context, it is often common to look at "debt held by the public," and thus to leave out the case where government owes a debt to itself. But for purposes of international comparisons, using gross debt is common.

Japan far and away leads the pack on gross debt, at a debt/GDP ratio of about 200%. But Japan is also a special case with an extremely high domestic savings rate, and limited possibilities for Japan's consumers to invest those savings outside the country. Japan has financed its own public debt, without a need for an inflow of foreign capital. But not far behind are some of the problem children of the euro area: Greece, Italy, Portugal and Ireland. Spain, despite the recent travails of its banking system, was actually a bit below the average for public debt/GDP ratio in 2010.

The U.S. position in 2010 is uncomfortably high: a bit behind some of Europe's problem cases like Greece and Italy and Ireland, but with a higher debt/GDP ratio than Germany, Canada, or the UK. It's also interesting to me that the high-tax, high-spending economies of northern Europe--Sweden, Denmark, Norway, and Finland--are all below the average on debt/GDP ratio. Their governments do spend more, but in this comparison group, they do a reasonable job of collecting the revenues to pay for it.