The BP Statistical Review of  World Energy is out for 2012. It's always a good reference for basic quantity and price data. Here are three graphs that caught my eye, and a few thoughts.

As a starting point, here's a figure showing world consumption of energy by source going back 25 years to 1986. The comment under the table reads: "World primary energy consumption grew by 2.5% in 2011, less than half the growth rate experienced in 2010 but close to the historical average. Growth decelerated for all regions and for all fuels. Oil remains the world’s leading fuel, accounting for 33.1% of global energy consumption, but this figure is the lowest share on record. Coal’s market share of 30.3% was the highest since 1969." 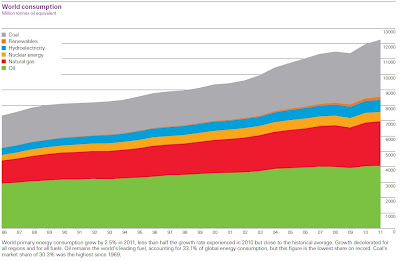 The sources of energy on the figure from bottom to top are green for oil, red for natural gas, light orange for nuclear, blue for hydroelectricity, dark orange for renewables, and gray for coal. It's true that the "renewables" slice has grown over time, from nearly imperceptible to actually visible. But it's useful to bear in mind that despite all the publicity about solar, wind, biofuels, and other renewable resources, they remain tiny compared with the other energy sources--especially the big three of oil, natural gas and coal. Even if public policies less favorable to fossil fuels were enacted worldwide, like a meaningful carbon tax, and even if technological progress in renewables continues to ramp up at a rapid pace, realistically speaking the big three fossil fuels will dominate world energy production for the next few decades. 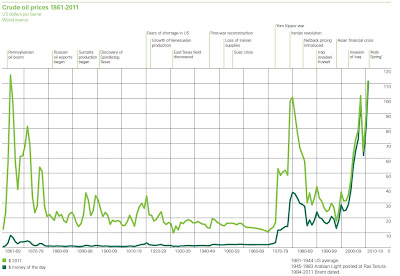 The share of oil in world energy consumption is the lowest on record, BP reports. Part of the reason is the price. Here's a figure showing the long-term price of oil going back 150 years to 1861. The dark green line shows oil prices in nominal dollars; the light green line shows oil prices in real inflation-adjusted dollars. It's striking that after the Pennsylvania oil boom of the 1860s, real oil prices dropped to historically low levels and pretty much stayed there from 1880 up to the early 1970s--nearly a century of relatively cheap oil. Since then, crude oil prices have been seen two enormous spikes: one in the 1970s and one in the last few years. Both spikes took real prices of crude oil roughly back to where they were in 1860, before the era of cheap oil began.

Oil is produced, shipped and sold in a global market. Natural gas is tougher to ship all around the world, unless or until there is a very large investment in the pipelines and ships that could make it possible. As a result, natural gas prices are falling in the U.S in the last few years (red line on the graph) while rising in places like Germany, the UK, and Japan. 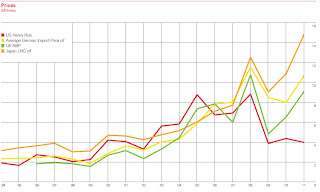 Of course, the fall in U.S. natural gas prices is largely due to the rise in unconventional natural gas production. I posted on June 7, 2012, about "Unconventional Natural Gas and Environmental Issues." My own grand compromise proposal for U.S. energy policy is the "Drill Baby Carbon Tax" -- basically push ahead with domestic production of fossil fuels, with environmental safeguards in place, but at the same time impose a carbon or pollutant tax to encourage the transition to increased energy conservation and to less-polluting sources of energy.
Posted by Timothy Taylor at 6:00 AM