Will Jobs Be Reshored from China?

China is becoming a less attractive place for off-shoring of manufacturing. But the result isn't likely to be a large movement of jobs back to the United States. Instead, globally mobile manufacturers are likely to seek out alternative low-cost destinations. Michel Janssen, Erik Dorr, and Cort Jacoby of the Hackett Group discuss these issues in a report called "Reshoring Global Manufacturing: Myths and Realities." The subtitle is: "By next year, China’s cost advantage over manufacturers in industrialized nations and competing low-cost destinations will evaporate." The report is freely available here, with free registration.

"[T]he manufacturing competitiveness of China compared to advanced economies and low-cost geographies is eroding. Stagnant or declining manufacturing wages in the West, rising transportation costs, concerns about intellectual property protection, and Chinese wage-rate inflation have brought traditional calculations about global manufacturing sourcing strategies to a tipping point  .... Our findings debunk a myth about the future of manufacturing that has been much discussed in the press recently: that manufacturing capacity is returning in a big way to Western countries as a result of rising costs in China. The reality is that the net amount of capacity coming back barely offsets the
amount that continues to be sent offshore. Our study confirms that China’s relative competitive position is indeed eroding rapidly, to the detriment of its overall economy. However, few of the low-skill Chinese manufacturing jobs will ever return to advanced economies; most will simply move to other low-cost countries."

Here is their estimate of  the gap in manufacturing costs and in "total landed cost," which includes costs of manufacturing along with costs of raw materials and components, transportation and logistics, taxes and duties, and costs of carrying inventories. China continues to have an cost advantage, but the advantage is no greater than other  emerging markets. Moreover, the Hackett Group argues that when China's advantage in total landed cost gap drops to the levels projected for 2013, it starts to make sense to think about shifting production elsewhere. 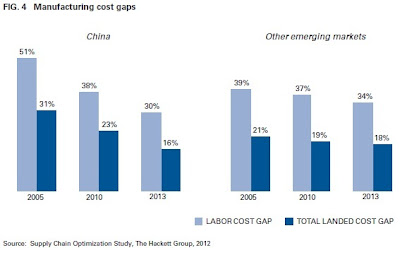 I was also struck by some comments in the report about Apple's labor costs with the iPad and outsourcing to China. They emphasize that in some industries like furniture manufacturing, cost matters most. But in other industries, product quality, protection of intellectual property, time to market and ramp-up speed may matter more.

"The Chinese labor-cost component of an entry-level iPad retailing for $500 is estimated at $10, or 2% of revenue, while the profit margin is estimated at $150, or 30% of revenue. If Apple were to move production to the USA, and if one assumes that assembly costs would triple (to $30), it is conceivable that Apple could convince customers to pay for a large portion of the price increase based on the appeal of a “made in the USA” product. ... Furthermore, ...  such a move could substantially boost Apple’s corporate image. However, the U.S. lacks the sheer labor capacity that would be required in order to ramp up production of iPads at the speed needed to maintain the company’s edge in the hyper-competitive tablet and mobile device market. ... Thus one may assume that Apple’s manufacturing sourcing strategy is primarily motivated by scalability and supply chain
risk, and only secondarily by total landed cost."
Posted by Timothy Taylor at 6:00 AM