"Unconventional" natural gas production is booming in the U.S.: that is, shale gas, coalbed methane, and "tight gas," which is similar to shale gas but found in low-permeability formations.  However, there are two sets of environmental concerns. One involves protecting the environment while actually extracting this gas. The second involves how finding a substantial new source of energy might affect air pollution, including the carbon emissions that pose a risk of global warming.  The International Energy Agency discusses the issues in "Golden Rules for a Golden Age of Natural Gas." (The IEA is an autonomous international agency with 28 member countries and a staff of 260. It was founded back in 1973-74 as part of the response to the oil price shock at that time.)

As a starting point, here's an overview of the U.S. situation, with a map showing where the main deposits are located: 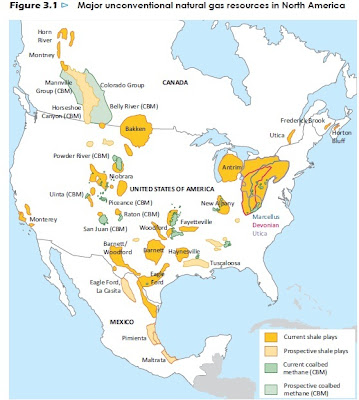 One part of the report tried to enunciate a set of "golden rules" that should be followed to protect the environment while extracting this gas. There is a lengthy discussion of these "golden rules," but the overall tone can be discerned from the main headings (each of which has several subheadings): Monitor, disclose and engage; Watch where you drill; Isolate wells and prevent leaks; Treat water responsibly; Eliminate venting, minimise flaring and other emissions; Be ready to think big; Ensure a consistently high level of environmental performance.

Intriguingly, the IEA finds that the costs of implementing this "golden rule" environmental agenda are quite manageable in the context of the overall cost of these projects: "We estimate that applying the Golden Rules could increase the overall financial cost of development a typical shale-gas well by an estimated 7%."  I would interpret this finding as saying that there is no cost-based justification for not undertaking at least this level of environment projection, if the exploitation of unconventional gas reserves is to proceed.

The other main environmental issue is the concern that abundant natural gas will add to air pollution, including both conventional pollutants and carbon emissions that bring a risk of climate change. The IEA modelling suggests several effects would take place. Natural  gas will reduce the need for burning coal to generate electricity and burning oil for heating and transportation, which tends to reduce carbon emissions. But on the other side, cheaper natural gas will also slow the deployment of more expensive non-carbon energy sources, and the quantity demanded of natural gas will rise as it gets cheaper. Overall, these counterbalancing effects would lead to a modest reduction in carbon emissions. The IEA writes:

"[I]t is difficult to make the case that a reduction in unconventional gas output brings net environmental gains. The effect of replacing gas with coal ... is to push up energy-related CO2 emissions, which are 1.3% higher [without added natural gas] than in the Golden Rules Case. ...  Additional investment in coal-fired generation locks in additional future emissions, since any new coal-fired power plant has an anticipated operating lifetime in excess of 40 years. Though many of those concerned with environmental degradation may find it difficult to accept that unconventional gas resources have a place in a sustainable energy policy, a conclusion from this analysis is that, from the perspective of limiting global greenhouse gas emissions, a Golden Rules Case has some advantages ... while also bringing with it other benefits in terms of the reliability and security of energy supply."

The IEA immediately goes on to say that a strategy of encouraging development of unconventional natural gas isn't enough to ameliorate climate change concerns:

"[R]reaching the international goal of limiting the long-term increase in the global mean temperature to 2°C above pre-industrial levels cannot be accomplished through greater reliance on natural gas alone. Achieving this climate target will require a much more substantial shift in global energy use, including much greater improvements in energy efficiency, more concerted efforts to deploy low-carbon energy sources and broad application of new low-carbon technologies, including power plants and industrial facilities equipped for carbon capture and storage. Anchoring unconventional gas development in a broader energy policy framework that embraces these elements would help to allay the fear that investment in unconventional gas comes at the expense of investment in lower carbon alternatives or energy efficiency."

My own grand compromise proposal is for the "Drill Baby Carbon Tax." On one side, it calls for making a national commitment to using domestic energy resources including natural gas, coal and oil, for the jobs, the lower energy prices, and the reduced dependence on imported energy. On the other side, it also calls for a carbon tax so that the prices paid by consumers for energy sources that pollute the air reflect the full social costs of that energy production, and thus will also encourage development of cleaner energy sources.  Indeed, one can envision a future for electricity generation where there is increasing reliance on noncarbon sources over time, but when the sun isn't shining and the wind isn't blowing, we have abundant natural gas as a reliable backup.
Posted by Timothy Taylor at 6:00 AM