Faithful reader M.R. was looking through archives and found my first post of  May 17, 2011, on "Two ways of illustrating the financial crisis" and the follow-up post of August 3, 1011, on "Four More Ways of Illustrating the Financial Crisis." He writes:  "[M]y reason for this email is to differ over your 2 + 4 ways of illustrating the financial crisis.  To me the illustration is a graph I have never seen -- hint to one who knows the literature much better than I -- a graph of the market value of residential real estate." Here  are some illustrative graphs made with the ever-useful FRED website of the Federal Reserve Bank of St. Louis, all using data from the Federal Reserve's Flow of Funds accounts.

What is the drop in the total market value of residential real estate? Here's the data series on :"Real Estate - Assets - Balance Sheet of Households and Nonprofit Organizations." The drop is from a shade over $25 trillion in October 2006 to $18.2 trillion in October 2011. And yes, you do see a little upward wiggle at the right-hand end of the line, a rise to $18.6 trillion in the most recent data for January 2012. 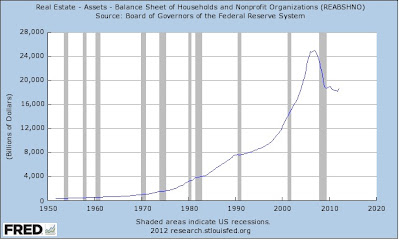 For many households, of course, what matters is not the total value of your property, but how much equity you have in the property. For example, if the value of your house declined from $320,000 to $240,000, but  your outstanding mortgage is  $250,000, it's not all that comforting to notice that your home still has a positive market value overall. Here's the graph showing "Owner's Equity in Household Real Estate." Equity peaked at $13.5 trillion in January 2006, and dropped to $6.2 trillion in October 2011--a drop of more than half. 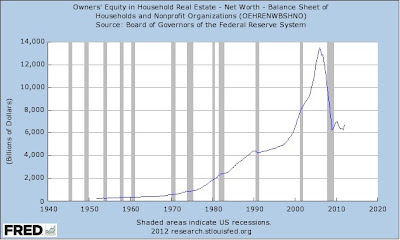 Both of these time series are in nominal dollars. In the next two graphs, I've divided them by nominal GDP, which has the effect of adjusting both for inflation and for real growth of the economy over time. First, here is the total value residential real estate divided by GDP. 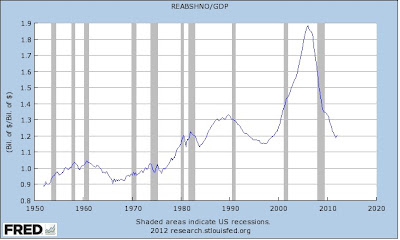 Just to be clear, there is no reason why the share of housing compared to GDP should be a constant over time. Rising incomes will presumably cause people to consume more housing, but the pace at which total housing consumption rises could be faster or slower than the growth of the economy over time. If you squint at the figure and twist your head a bit, one can imagine that the total value of housing as a share of GDP is rising gradually over time, but with a lot of fluctuations. Clearly, the price spike in the mid-2000s was far outside the pattern of any such long-run historical trend.

The final graph is owner's equity in housing divided by GDP. It's interesting to observe that housing equity relative to GDP became a more important asset from the mid-1960s up through the late 1980s. A lot of the advice one used to hear about buying a house early in life was from people living through that experience. Through much of the 1990s, the ratio of owner's equity to GDP fell, but in the early 1990s, that was partly a result of depressed regional real estate markets in certain states in the aftermath of the collapse of many savings and loan institutions in the late 1980s and early 1990s (which made the numerator of the ratio decline), and also a result of fast economic growth from the mid-1990s on (which made the denominator of the ratio rise). Again, the bottom line is that the spike in the total value of housing that ended around 2006 is well outside the post-World War II historical experience. And the drop since 2006 takes this ratio from by far its highest value since 1950 to by far its lowest value since 1950. 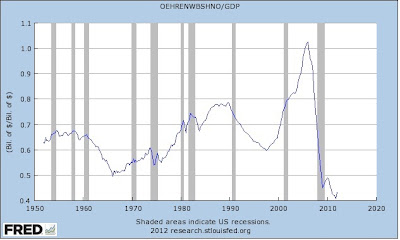 Of course, the financial crisis itself is more than just drop of nearly $7 trillion in housing values. It's also about what forces created the housing bubble in the first place, and how the bursting of the bubble translated itself into weaknesses in the banking and financial system. But the rise and fall of housing values is a central part of what occurred.