How Digital Check Imaging is Saving $3 Billion Per Year


Back in the 1980s and 1990s, there was an occasional outbreak of controversy around the idea of the check "float," defined as how long after you deposited a check in your account were the funds actually available to you. Banks were often accused of failing to credit deposited checks to accounts as quickly as they could, because if they could hang on to the money for a few days longer, they could earn a bit of additional interest. The Expedited Funds Availability Act of 1987 was passed to limit the ability of banks to hold checks and benefit from the "float" (For example, here a 1997 article on some aspects of the check float controversy from the Federal Reserve Bank of Richmond.)

But the events of September 11, 2001, led--along with a host of considerably more important consequences--to a movement away from paper checks and to digital images of checks, thus largely ending the check float controversy. David B. Humphrey and Robert Hunt tell the story in "Getting Rid of Paper: Savings from Check 21," just published as Working Paper 12-12 for the Federal Reserve Bank of Philadelphia.

Here is their description of the past process in clearing checks: "The Uniform Commercial Code has long required U.S. checks to be physically presented to the banks they are drawn on for payment. ... [T]he required physical presentment generated expensive air and land courier transportation costs. It also led to delays in check collection of from 1 to 5 days, averaging 1 day for local or within-city checks and usually 2 to 3 days for non-local items such as checks going from one city to another across the country."

But the events of 9/11 led to legislation allowing banks to accept digital images of checks that could be transmitted electronically.  "On September 11, 2001, planes were grounded and check fl‡oat—--the value of checks in the process of transportation and collection—--rose to $47 billion (about eight times the normal daily level), while electronic payments were unaffected. Although the technology has been available for almost two decades to digitize check images and collect checks electronically on a same-day basis, the legal requirement of physical presentment inhibited its adoption. ... The September 2001 disruption spurred the Federal Reserve to ask Congress to allow a paper representation of the digital image of the front and back of a check (called a substitute check) to be legally the same as the original physical item for purposes of collection and presentment. This legislation, adopted in 2003 and known as Check 21 (Check Clearing for the 21st Century Act), along
with other initiatives, currently permits almost all of the 24.5 billion checks paid annually in the U.S. (worth $32 trillion) to be collected electronically on a same-day (or next-day) basis once they are deposited at a bank. The original check is imaged and transported electronically, and a substitute check is printed close to where the paying bank is located. The substitute check is then physically
presented for payment. Since accepting billions of substitute checks is more costly than accepting and paying the electronic image itself, almost all paying banks now receive and pay the image." 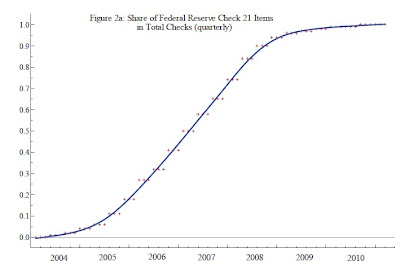 The Check 21 legislation has shortened the float, so that it often happens in the same day or in one day, and never in more than two days. "Since with Check 21 geography no longer matters, all deposited checks must be made available within 2 business days under Regulation CC (which implements the 1987 Expedited Funds Availability Act). Previously, some transit items could have had a maximum delay of up to 5 days when collection was physically difficult."

Allowing banks to transmit digital images of checks, rather than paper checks themselves, led to three main areas of cost savings:

Along with this $3 billion or so in itemized gains, participants in the financial system would also have benefited from the greater certainty of knowing that your money would be available sooner.

A few weeks ago on May 21, I posted about "Illustrating Economies of Scale," and the conversion from paper checks to digital images offers an example. Humphey and Hunt argue that as digital electronic checks ramped up, they were able to take advantage of economies of scale to reduce averae per-unit costs. On the other side, as paper checks were phased out, they lost the advantages of economies of scale and thus saw per-unit costs rise. Here's the figure: 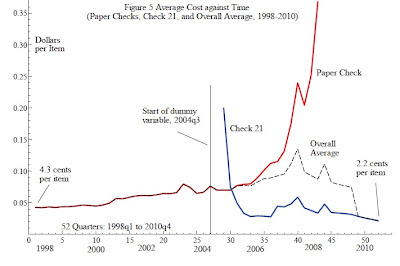 The story of the transition from paper checks to digital checks isn't a major economic episode. But it's one more nice illustration of how digital technology and the Internet have been transforming the ways in which economic activity is conducted.