I'm always hesitant to proclaim that economic growth is finding a foothold in sub-Saharan Africa. There were just too many reports in the 1960s, 1970s, 1980s, and even the 1990s that growth in Africa was on the verge of taking off--only to see disappointment a few years later. But Africa's economic and social statistics in the last decade or so do look genuinely promising. The World Bank puts out an "Africa's Pulse" report twice per year, and the most recent edition offers some statistics.

Here are some rates of real GDP growth for sub-Saharan Africa, shown by the yellow line. The blue bars, for comparison show the annual growth rates for real GDP among the other developing economies of the world, although excluding China, which is now classified by the World Bank as an "upper-middle-income" economy. The red line leaves out South Africa, which is also classified as an "upper-middle-income" economy by world standards, and which has been lagging the growth rates of the rest of sub-Saharan Africa for most of the last decade. There's clearly a hiccup with the global financial and economic woes of 2009, but a rapid and quick bounce-back in the last few years. 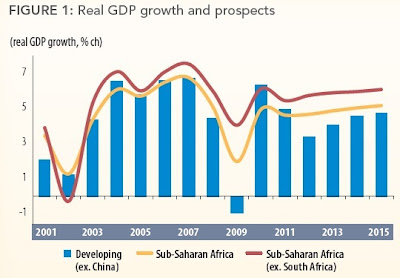 Africa's faster-than-average-for developing-countries growth rates are paying off in lower poverty rates. The share of the population in resource-poor countries in sub-Saharan Africa that is below the $1.25/day level of consumption fell from 65% in the late 1990s to 49% in the last few years. Rates of inequality as measured by the Gini coefficient are down as well. More detailed data also show gains in a wide variety of areas: child mortality, life expectancy, school attendance, access to sanitation, and others.

Perhaps the main overall question about Africa's growth performance in the last decade is how much it has been driven by higher global prices for raw materials and commodities--and thus if Africa's growth will again plummet if these prices sag.  As the report says:

"Continued demand for Africa’s natural resources as well as the recent discoveries of oil, gas and minerals in, among others, Ghana, Uganda, Kenya, Tanzania and Mozambique, together with an improved macro-economic environment, sustain prospects for robust economic growth. The pertinent question is how more of the new found resource wealth can be converted into fiscal revenues and effective public spending to foster sustainable development, improve human welfare, and generate more rapid income poverty reduction. In other words, how can we avoid another “resource curse.”  ...  Three core legs of natural resource management, each embodying their own political dynamics, are highlighted: 1) extraction—transparency regarding terms of contracts; 2) taxation—efficiency in tax collection; and 3) investment of resource rents—careful prioritization of public investment."

This figure divides economic growth between resource-rich and resource-poo countries of sub-Saharan Africa. Clearly, growth has been faster in the resource-rich economies. But the future also shows that compared with Africa's truly dismal economic record in the 1980s and 1990s, the last decade doesn't look so bad. The question for Africa is to build broad-based growth: that is, not just economic growth based on higher prices for natural resources and commodities, but growth more broadly based on raising productivity in agriculture and manufacturing, on connections in global markets, on provision of services in expanding cities, on expanding infrastructure, and more. Maybe Africa's time in the economic sunshine is coming.